Pink teams up with Keith Urban for carefree country-pop anthem 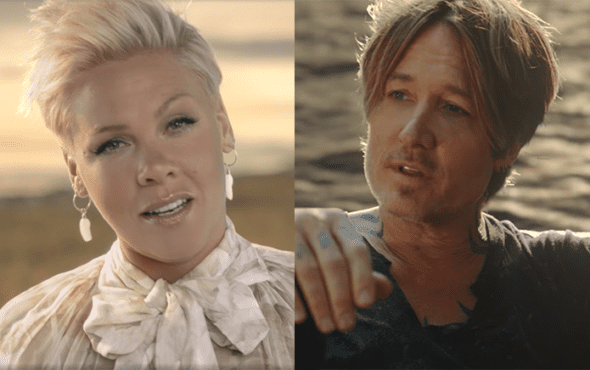 Keith Urban has recruited Pink for his brand new single, One Too Many.

The relatable country-pop anthem is a boozy affair, with the two singer-songwriters reflecting on how they spend their money “drinking on my own” and how they need someone to take them home because they’ve had “one too many”.

To celebrate the release, Pink and Keith delivered a performance of the track at last night’s Academy of Country Music Awards, which the latter was hosting, in two different time zones.

The performance was met with critical acclaim.

In a statement, Keith said he’s “always loved” Pink’s voice and praised her “artistry and her multi-faceted ability to create, and her God-given talent,” hailing her as “one of the greatest voices of our time.”

He also added that he “couldn’t have pictured anyone else’s voice on the song.”

One Too Many, which is taken from Keith’s third studio album The Speed of Now Part 1, is Pink’s first single since the Khalid-assisted pop anthem Hurts 2B Human.

The Grammy winner, who recently made history with the second highest-grossing tour of all time by a female artist, previously dipped her toe in the country genre with Mean – one of the best non-singles on her fifth studio album Funhouse – and Setting the World on Fire, a duet with American singer Kenny Chesney.

Love Me Anyway, another track from her 2019 effort, Hurts 2B Human, was serviced to country radio last year. It featured country legend Chris Stapleton.

One Too Many is now available on streaming services – listen below on Apple Music or watch the carefree, Just Give Me a Reason-esque music video here.