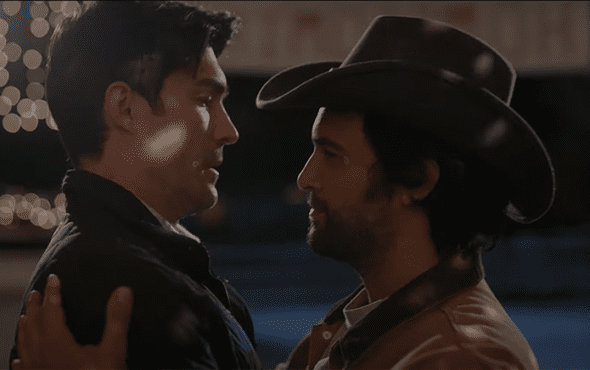 The Paramount Network has just unveiled its brand new trailer for Dashing in December, a coming of age LGBTQ+ holiday love story.

Fuller House star Juan Pablo Di Pace will be starring in the film alongside movie icon Andie MacDowell and Young And The Restless heartthrob Pete Porte.

The film follows Porte’s character Wyatt, a prim and proper city guy who comes back to his rural hometown for the holidays. Along the way, he meets Heath – a town local with a heart of gold.

It’s going to be filled with romance, holiday cheer, and of course the bouts of angst here and there.

Meghan Hooper, EVP and Head of Original Movies and Limited Series at Paramount opened up the film stating: “This feel-good project captures the importance of inclusive storytelling the power of love and the spirit of the holidays all rolled into one.”

The holiday season sees the release of an array of holiday LGBTQ+ films.

The Hallmark Channel, which has been known for its conservative and straight productions, is gearing up for their first-ever LGBTQ+ holiday film The Christmas House starring Mean Girls Jonathan Bennett. Hulu, Lifetime and Tello Films have also announced projects that center around LGBTQ+ couples with Happiest Season, The Christmas House and I Hate New Years.

You can catch Dashing in December on Paramount Network on Sunday 13 December.

In the meantime, watch the full trailer for the film below