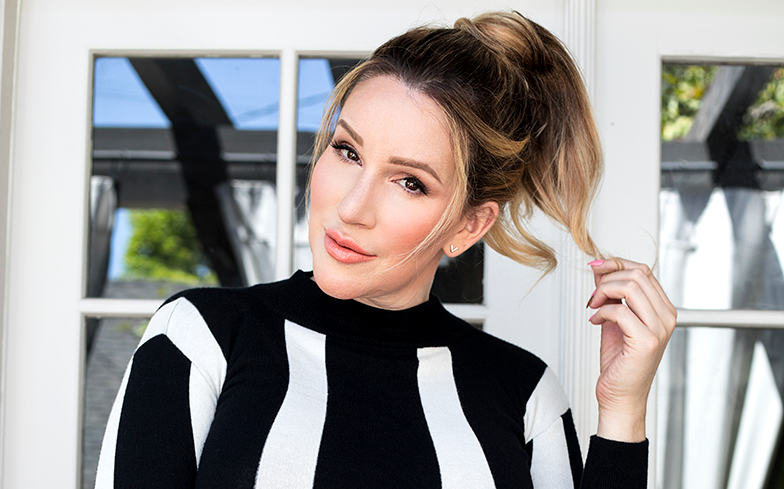 Last year, FX drama Pose – the latest show on Ryan Murphy’s ever-expanding roster – premiered to universal acclaim and made history with the largest cast of trans actors on television.

The series, which follows the world of ball-culture in 1987, was renewed for a second season and subsequently received nominations at the Golden Globe Awards and Critics Choice Awards. Writer and producer, Our Lady J – who has also provided her talents to the Amazon comedy-drama Transparent – caught up with her friend and activist Munroe Bergdorf to discuss the success of Pose, and how she drew from her experiences as a HIV-positive trans woman to create one of the most authentic shows on television.

Munroe: Hey babe! So you must be over the moon with the reception Pose has received. Was that expected?

MB: When you first went into those meetings to discuss what you wanted to do, what were your first initial thoughts?

OLJ: 2005 was the first time I came out as trans, and so a lot of my sisters and family members from the scene in New York had grew up during this period of time. I had heard stories of the late 80s in New York and I had been to a few balls, but most of what I knew was from Paris is Burning, which was an important documentary for me as a trans person. So I was immediately interested in the context of Pose, that it would be further exploring the ballroom scene but with fictional characters. When I went into that room and I met Ryan Murphy and all the producers, what really got my attention was Ryan’s promise to hire trans people of colour in every department. And when Ryan said he was talking to Janet Mock, I was like, ‘Oh, Ryan means business,’ because Janet is the real deal. She is a fierce advocate and incredible writer so I was in immediately. I said, ‘Where do I sign?’ MB: Amazing. Through your writer’s voice, we’ve seen issues about the trans community and HIV/AIDS. Were they the first topics that came into your mind in the writer’s room?

OLJ: Those are the things that I have the most experience with, and dating men who are attracted to trans women is very frustrating. The fact is, if someone is attracted to women, they’re in general attracted to cisgender and trans women, but they’re usually not woke around their attraction to trans women until they meet a trans woman. You find that there’s just a lot of unnecessary shame, and when you really dig deep to the root of the shame, it’s systemic transphobia that they’re encountering and forced to look at in their life. I found that to really limit my options in dating and as an artist, I wanna tell stories that are passionate and real. But as an activist, I wanna tell people stories that help people live their lives. So it seemed to be an intersection of both of those things, where I could really tell an honest story of what it’s like to be a trans woman who’s dating, and also as an HIV positive woman, I knew I could really add that element to the storyline as well. I found out I was positive 15 years ago and I became an accidental activist in that area when I realised that a lot of doors were suddenly closed. I’ve been undetectable for just as long and undetectable is untransmittable. That’s something that people are just now learning. The virus itself doesn’t really affect my life, besides taking care of myself and taking medication. However, there’s all this stigma that I face on a daily basis, especially in dating. So in 1987 when we begin Pose, it’s really the birth of that stigma, and I knew that there was an opportunity to do a lot of work to examine how that stigma came around and what we can do to eradicate that stigma in 2019.

MB: What has the feedback been on those storylines? Because they’re storylines that I feel you tell the most authentically. With Transparent as well, you can really hear your voice. As your friend, I could feel the intention behind your words through the characters. You must have had such amazing feedback?

OLJ: It’s really great. I started my career as a performer in front of the camera and one of the things that I found difficult was separating art from identity. But being a writer and producer on a show, I’m really enjoying this separation and being able to have a voice without being the voice. I feel it’s so much safer to explore things that are terrifying to me because I know it’s not going to be my face attached to that. I get to admit mistakes that I don’t want to admit to when I’m writing fiction. Our characters stumble and fall, but that’s what adds to their humanity and their depth.

MB: That’s what adds to our depth as well.

OLJ: Yeah, it’s nice, and in the age of social media and everything being online, everything is so literal right now. We don’t allow each other to stumble and fall. There’s no grace in our mistakes, and so I’ve found my remedy to that is going into fiction. Maybe I’ll return to something that’s more autobiographical, but losing myself in these characters and living life through them, really enriched my life in ways that I never expected. Our Lady J wears dress by Debshops; hoisery by Falke; ring is vintage

MB: Well it’s enriched our lives as well. Speaking from personal viewing with Transparent and Shea’s storyline with Josh…

OLJ: That was a hard one to write, can I be honest? Bridget Bedard wrote that episode and she did it so beautifully. When we breaking the story together though, it was something that I was living. Transparent was very much like, ‘Okay go live your life and then tell us about it and we’ll put it on TV.’ [Laughs] Pose is definitely different than that, but with Transparent, I was very frustrated with dating as a trans, HIV-positive person, yet knowing that PrEP is out there. Condoms are enough to keep you from transmitting HIV or from catching HIV, but people still don’t believe that. You know, what else do you have to do? ‘Well there’s PrEP.’ ‘Okay, well PrEP and condoms, is that good enough for you? Okay, well I’m also undetectable.’ So there are all these different layers that I was trying to prove myself, as a human being, saying that I am loveable, I am a sexualised woman and yet I’m being contained in this area of disease and infection. And then we’re taken and stripped of our sexuality and put into this box where we’re untouchable. Even the language in which people communicate is problematic. A lot of people say ‘I’m clean’ when they’re HIV-negative, and that insinuates that HIV-positive people are not clean. But you know me, my hygiene is perfect! [Laughs] I am lovely, I am washed, I am clean, I just happen to have the HIV virus and it is untransmittable, and that’s something that I wanted to explore in that episode.

MB: What you’re doing is an antidote to years and years of bad television so it’s amazing that you’re humanising the experience, because that just wasn’t there before.

OLJ: I believe that’s the beginning to the end of violence against our community. To humanise their stories so when people watch our lives on screen, they can empathise with trans people when they see trans people on the street, at their work, at their church, wherever they run into trans people because we’re everywhere. They won’t have this gut reaction of violence, they will think twice. And we haven’t been taught that, we’ve been told for so long in the media that we are less than human, as you know.

MB: What has it been like working with the incredible Janet Mock?

MB: And working with Ryan Murphy, how has that been?

OLJ: He’s incredible. I don’t know how he does it, he is so busy with all of his shows and yet when you’re with him, he’s so present. There’s nothing else that’s happening except for what’s in that room, in that moment. He’s been so inspiring with his humanitarianism as well. He’s very passionate about HIV and AIDS advocacy, and a lot of the work he’s produced in the last few years has reflected that. Also, he was an out gay man when gay men weren’t out, and so he was on the frontline battling for our community in Hollywood, having meetings behind closed doors with powerful executives and standing up for LGBTQ people. MB: Can you tell us anything about season two of Pose?

OLJ: Well, you can expect more fashion, more drama. Elektra is of course going to have more bitchy one-liners that will be turned into memes by children on the internet. And we move forward a year, we’re skipping to 1989. So some things have changed in the characters’ lives, and I can’t really get into the details of it, except we’re going even further into HIV/AIDS activism, and what that’s like for all of our characters. They’re in the middle of a plague here, and they didn’t know how the plague is going to end. The plague still hasn’t ended, but at least we’ve seen the course with medication now, and it’s no longer terminal if you have access to medication. We have the hindsight these characters didn’t, so we’re really diving into that.

MB: Do you think the lack of representation in Hollywood is getting better? And as a writer, how do you think non-trans people in the industry can be more including of trans people?

OLJ: Transparent was really something that we had to prove to our colleagues. We had to prove that we could show up to work on time and get the job done and do it well. And so there were non-trans people on Transparent who gave us that opportunity and allowed space for that. The same thing has happened with Pose, people within the industry are acknowledging that we have been systematically oppressed for so long that there are just all of these negative messages about trans people at the workplace, that we’re not hireable. Even the law says you can fire someone for being trans. With all of the success we have with shows like Transparent and Pose, the more shows we will have with trans people working on them, even if it’s a show that’s not about trans.

OLJ: We’ve proven it, we’ve proven that it’s possible and that we can naturally generate work that people watch. I’m really old. I’m an old, transsexual woman honey! I’ve earned a space on this planet and I am inhabiting that space, and I’m moving forward with bravery. I’ve been fired from jobs in the entertainment industry. 2011 was the last time someone told me to my face that I was fired from a job because I am trans.

OLJ: And it’s so rare that people actually say it. It happens all the time, you either don’t get called back for a job or you get low and it’s unclear, even though you did an amazing job. I’ve been told to my face that I was fired because I am trans and now, in 2019, eight years later, that would never happen. If it did happen to your face, it would be a headline. I feel like people are learning, and we still have a long way to go with educating. I do believe we are well on our way.