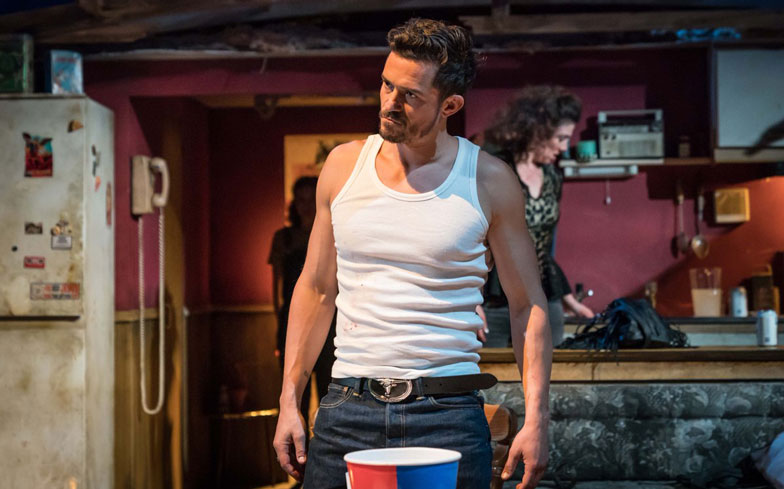 The intimate Trafalgar Studios provides the setting for this revival of Tracy Letts’ 1993 play.

Killer Joe is certainly not a show for the faint-hearted. It tells the story of the Smith family, who live on a trailer park and have some serious money issues. Following some questionable decisions, they conspire to murder the estranged matriarch of the family to receive her insurance payout. They hire Joe Cooper, a local detective moonlighting as a part-time contract killer, to do the job. The half-baked plan inevitably goes wrong, leading to some unsavoury consequences.

Star of the show is, of course, Orlando Bloom playing the titular Killer Joe Cooper. Cool, calm and considered in all his movements and deliberations, he contrasts perfectly with the chaotic, noisy Smith family. The other members of the cast all put in strong performances, too – the acting is highly accomplished throughout. Of particular note, we appreciated the mysterious and multi-layered Dottie, played by Sophie Cookson.

The subject matter and its portrayal may not be to all tastes and Killer Joe is certainly difficult to watch at times. It explores some challenging moral dilemmas and features some extremely graphic scenes of a sexual nature – we’re not sure we’ll look at a KFC bucket the same way ever again. One scene we found particularly unsettling involved the clearly young and vulnerable Dottie being seduced, quite against her will, by a calculating and controlling Joe. It made for rather unpleasant viewing, but at the same time it was also incredibly gripping.

While it’s undoubtedly a heavy story line, there is a lot of humour here, although it’s exclusively dark comedy – there is nothing lighthearted or slapstick about this production. There are, however, dozens of witty lines that had the audience cackling – it certainly balances out a text that could so easily be relentlessly bleak.

Killer Joe won’t appeal to everyone and it’s certainly a challenging piece of theatre. There are plenty of disconcerting moments and some of the moral questions it raises are difficult. It is, however, an interesting and compelling play with a healthy dose of humour, featuring a commanding performance from Orlando Bloom and a talented supporting cast.