Only Fools and Horses musical an enjoyable nostalgia fest – review 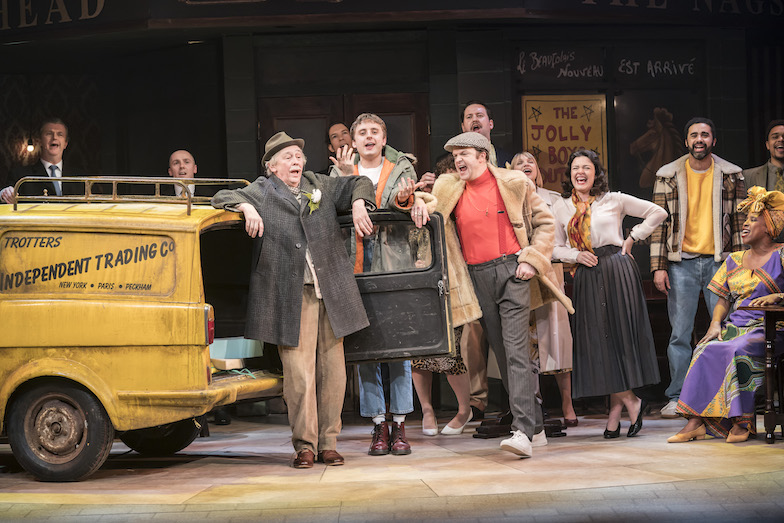 Directed by Caroline Jay Ranger, this new musical, based on the classic TV show, has opened at the Theatre Royal Haymarket.

Fans of the series will be delighted to learn that Only Fools and Horses the Musical changes very little from the original format. Writers Jim Sullivan (son of John Sullivan, writer and creator of the TV series) and Paul Whitehouse (who stars in this adaptation as Grandad) have faithfully reproduced Peckham circa 1989, featuring scenes immediately recognisable from the show, including the Trotters’ council flat and the Nags Head pub.

With numerous references to running gags from the series, it feels at times more like an extended episode – with some tunes thrown in for good measure – rather than a stage musical. We did have some concerns about the style of humour, in the respect that it may feel a bit dated or repetitive – however we found ourselves, if anything, even more entertained as the show progressed. We were worried that Del Boy’s constant use of the wrong word or misappropriation of another language would wear thin quickly, but it remained funny throughout.

Everything here feels very unashamedly British, which for some might be an acquired taste. The language used is east end through and through – all geezers and cushty and lovely jubbly – while there’s a real knees-up feel to a lot of the songs; it’s no surprise at all to learn there are contributions from Chas n Dave. It all works well in context, but we’re aware it won’t be everyone’s cup of tea.

Unusually for a musical, we felt that the script was stronger than the score. It certainly has its moments – the original theme tune is present and receives a rapturous response, and there’s a superb new number A Bit of a Sort – performed in a dating agency as Del Boy (Tom Bennett) describes his ideal woman with the help of a dating agent (Oscar Conlon-Morrey, hilarious). The Tadpole song made us chuckle, too, particularly with some entertaining graphics.

Both of these new songs were amusingly staged and had some witty one-liners – but the fact they stood out so much from the rest of the new material highlighted just how forgettable some of the other numbers were. There were a couple that we thought could have been axed altogether; Being a Villain didn’t really add anything to proceedings, while Gaze Into My Ball – which took a step into Peckham 2019, all artisan bakers and upmarket cafes – had a couple of amusing gags towards the end, but took far too long to get there.

On balance, though, we were pleasantly surprised by Only Fools and Horses: The Musical. The witty script allayed our concerns about the humour being potentially dated and repetitive, resulting in an entertaining and enjoyable nostalgia fest. This production will obviously appeal to fans of the original series, but an in-depth knowledge of the TV show is not a prerequisite – for hardcore fans, or those with just a casual awareness of the series, this is an entertaining night out either way.

Gay Times gives Only Fools and Horses: The Musical – ★★★★☆