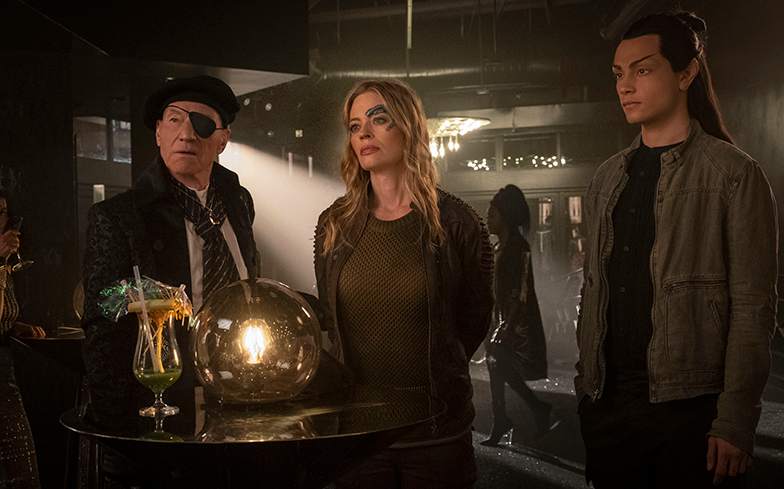 The season one finale of the sci-fi series, which sees the return of Patrick Stewart as his fan-favourite character Jean-Luc Picard, confirmed that Jeri Ryan’s legendary hero, Seven of Nine, is in a same-sex romance.

The small moment saw Seven – who was originally introduced in the fifth series in the Star Trek franchise, Voyager – hold hands with Michelle Hurd’s character Raffi in a romantic manner, despite their lack of scenes together throughout the season.

Ryan seemingly confirmed Seven’s queer identity on Twitter. After a fan asked if the character is officially a member of the “rainbow flag family,” the star responded with just one emoji. Yep, you guessed it: a rainbow flag.

Because Picard had failed to show any kind of LGBTQ representation up until this point, fans were elated.

One wrote: “Can you believe Star Trek Picard gave us queer Seven of Nine? I wish I could go back in time and tell my baby gay teenage self who watched Voyager all day on the couch while skipping school sometimes dreams DO come true!”

Another tweeted: “i am just so so grateful for canon queer seven. i’ve only been in the star trek fandom for like a year, but this feels like justice for the queer fans who have always been such a huge part of star trek.”

The revelation of Seven’s queerness arrives just a week after series creator and showrunner Michael Chabon promised more LGBTQ representation for the critically-acclaimed Amazon Original in its upcoming second season.

After being told by a fan on his Instagram story that the debut season was significantly lacking queer characters, Chabon acknowledged this as true, saying: “You’re right, there has been a relative lack of emphasis there.”

He continued to state that the character’s sexualities “or rather our understanding of them, emerged and evolved over the course of the season, as our actors moved into and began to inhabit their roles”, calling it an “organic progress”.

Chabon then promised that sexuality and identity will “come more fully into play” in the show’s second season.

Australian actor Evan Evagora, who plays androgynous Romulan refuge and the loyal companion of Patrick’s iconic character, Elnor, then expressed interest in exploring his character’s sexuality in the future.

“Growing up in a very sheltered environment I’m not sure he’s had the time to fully explore his sexuality,” Evagora chimed in. “But [it] would be interesting to delve into that at some point.”

Star Trek: Picard, the eighth instalment in the Star Trek franchise, is set in the 24th century and follows the title character as he copes with the destruction of android Commander Data and the destruction of the planet Romulus.