On Blueberry Hill is an elegant and lyrical new play – review 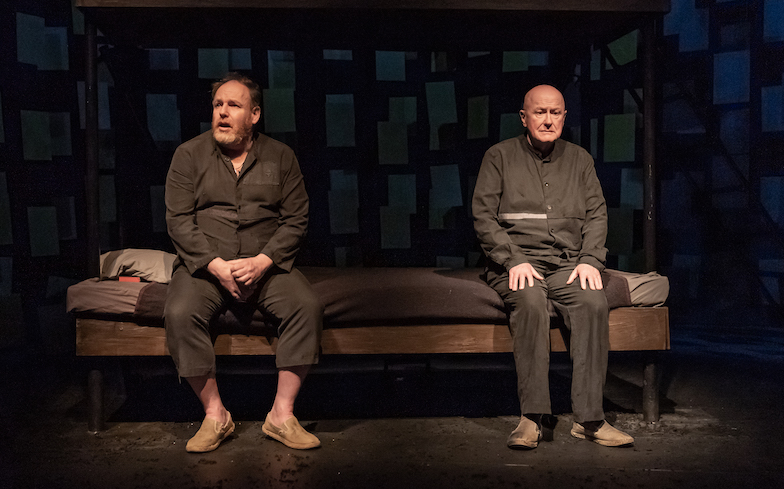 This elegant and lyrically-written two-hander is the latest play from Sebastian Barry. It’s no surprise that the language is so beautiful, as he’s the current Laureate of Irish Fiction and also has two Man Booker Prize nominations to boot. This production stars Niall Buggy and David Ganly and has recently opened at the Trafalgar Studios, under the direction of Jim Culleton. It’s an intimate and captivating show, unfolding as a series of monologues over the course of 100 minutes.

It tells the story of two prisoners, Christy and PJ, who are thrown in a cell together for 20 years. Over the course of the play they gradually realise the events that have brought them together, with explosive and bittersweet consequences. Elements of the narrative are a bit far-fetched – we had to suspend our disbelief on a few occasions – but we’re willing to forgive that for the sheer quality of the two performances and the strength of the writing. We don’t want to spoil any aspect of the story, but part of it includes quite an interesting snapshot in time of attitudes towards the LGBTQ+ community in Ireland in days gone by.

Staging-wise it’s an exercise in simplicity. The set comprises a bunk bed which the prisoners share, and both sides of the story are recounted from their prison cell. It’s a nice-looking set but there’s no technical wizardry here – the lighting is used to draw focus as and when required. That’s pretty much all there is to it, but it works very well – with a text as rich as this it doesn’t require anything else to bring it to life, beyond a pair of exemplary performances.

We’re aware that On Blueberry Hill won’t suit all tastes. Although it has warm and humorous moments, for the most part it’s pretty intense and serious, and at times it really is quite a slow burn. It’s a play that demands attention and focus from its audience – it’s not an easy watch – but our work is rewarded with beautiful language and two superb turns from the actors. Well worth checking out.