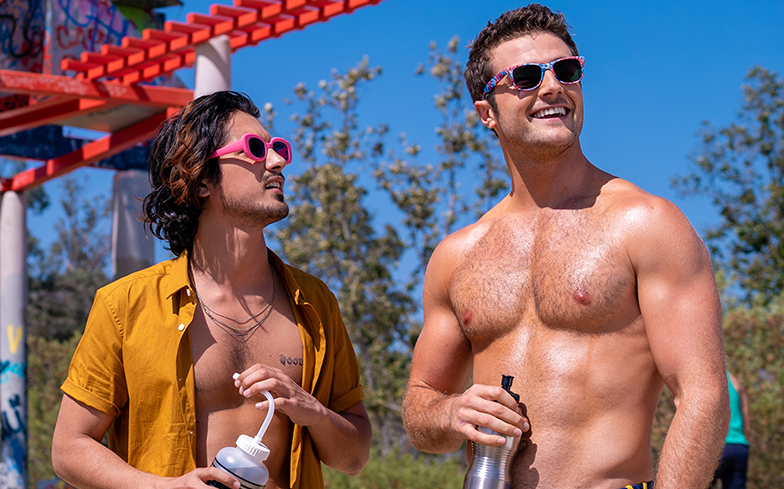 Now Apocalypse might be the queerest show we’ve ever seen on TV.

But this isn’t your typical coming-of-age comedy drama, as the cast’s queer and feminist-friendly sex and copious millennial pop culture references are threatened by the appearance of reptilian aliens and the promise of a dark and monstrous conspiracy theory. That, or Ulysses is smoking too much weed (it’s likely).

To celebrate the incredible levels of queerness in the show – and of course Tyler Posey playing gay – we spoke to creator and director Gregg Araki about why Now Apocalypse is the “queer Sex and the City” we never knew we needed.

There’s so much going on in this show. Were you given a limit on how far you could push things?
Starz have been amazing in the sense that they gave us total control over it. We went in and pitched that we wanted to make a show that was totally not like any other show on TV, it was just gonna be this queer Sex and the City but with aliens and a weird Twin Peaks vibe to it, and they loved it. They never said no to us, and these 10 episodes really became everything I’ve ever wanted. It was literally like my imagination unleashed and everything I’ve ever wanted to do in a TV show, we got to do. I’m so excited about it, because creatively it’s the most ideal experience I’ve ever had.

One thing that really stuck in my head is that there’s a gay sex scene two minutes into the first episode, which feels pretty ballsy.
When I sat down to write the show, that was the first thing that came out! I’ve always been interested in that surreal element, exploring that fine line between reality and fantasy, so there’s that ominous dream element, and then there’s this sexuality which leads into the next scene which is basically a Grindr hookup. That’s always been the first scene of the pilot in my head. The show is literally everything a queer audience would want.
I hope so! The show is definitely for the queers, and also for a female audience, because it’s very feminist and there’s a lot about female sexuality in there, and a lot of that comes from Karley Sciortino’s experiences – she has a vagina, and I don’t, so she knows a lot about those female-specific issues – but at the same time some of the people who are responding strongly to the show are very much outside of what we thought was the demographic. When we were doing the sound editing, there was this old straight guy in his 60s, and he was literally obsessed with the show. But that’s what’s so cool about TV, it’s such a democratic medium, it gets beamed out all over the world and it’s in everybody’s house, it’s not rarified the way independent cinema is. You have to be in a certain socio-economic level and a certain cultural level to access independent cinema, but TV is beamed out to everybody. I’m so excited for the idea that this is gonna screen in some West Virginia dude’s living room, you know what I mean? It’s going to be everywhere. I think it’s going to reach people who have never heard of me or indie cinema, and that’s so exciting. The poster’s slogan is just, ‘What the fuck?’ and that’s what I wanna see, I just wanna see people who are totally unsuspecting going, ‘What is this thing that’s showed up on my TV?’ and that’s what’s so cool about it. Also, the show has a really weird sweetness to it – and this is a testament to the actors and how fantastic they are – because it’s very punk rock and unapologetic in its queer sex and female sexuality, but it’s also very accessible and very sweet, and for me it has a sweet heart to it, and that’s why it’s not off-putting. It’s not an assault on your senses, because the characters are so lovable.

Yeah, the show is very surreal but that relationship between Avan and Tyler’s characters is actually very cute. Was it important for you to showcase a realistic same-sex dating scenario on screen?
There are so many elements of the show that are deeply personal to me, and for anybody who’s seen my movies the scenes with Avan and Tyler are very, very ‘me’. When we were figuring out the season, I talked about the Avan character being sort of the Mr Big of the show, and then Jacob Artist’s character, who appears in the last four episodes, is the Aidan of the show, and his scenes are very important to me and very my brand. The soundtrack is also very queer, with artists like Years & Years and Frank Ocean appearing. Was this intentional?
Of course it was! There’s a really cool Troye Sivan song in episode four as well. I mean it’s huge for us to get those artists, and that we got to clear their music for the show. I think that level of visibility and the audience that they speak to is so important just in our world, particularly given how there are nefarious forces and evil people out there who are trying to send us back to a time when America was not great, that terrible oppressive place to live in where black people had to sit at the back of the bus and gay people were in underground bars being raided and beaten up by cops. That’s what the world used to be like, and so I feel like those voices, the Frank Oceans and the Troye Sivans and the Olly Alexanders, are so important as a collective voice of hope, and I think for me that’s what the show aspires to be: a ray of light in these dark and terrible times.

There’s been a lot of conversation about bisexual erasure of late, so it feels quite refreshing that the character of Ulysses is openly bisexual and it’s not a big deal.
Yeah, and actually I’ve had these queer, quasi-bisexual characters in my work from the very start. My very first film, Three Bewildered People in the Night, the black-and-white one from 1987, actually has a bisexual character in it. It’s funny because the character in that film talks about how confusing it is to be 50% attracted to men and 50% attracted to women, like how do you decide? I consider myself mainly gay or queer, but at the same time I have been with women, I had a long relationship with a woman in the 90s, so it’s just something that I feel is important for the culture and for society to progress and evolve. Everybody should just be who they are. If you’re bisexual, that’s cool, if you’re trans, that’s fine. Everybody should just be free to be who they are, that’s what democracy is about: life, liberty and the pursuit of happiness. And that’s for everybody. Another thing I thought was really sweet about the show was that it features a ‘bromance’ between a straight guy and a queer guy, which you don’t see as often as that bond between straight women and queer men.
I love that relationship between Ford and Ulysses, but I do actually think things have changed and it’s not as unusual for straight guys and gay guys to be good friends anymore, because we have progressed a lot from those dark ages. I think it’s cool that people can be who they are and have these friendships, and I think that relationship is super important to see.

Avan and Tyler are very convincing in their roles portraying that same-sex relationship. How do you go about directing two straight actors to play queer roles, especially ones that involve so much queer sex?
We had a specific thing when casting the show, it was written in the casting breakdown, ‘This show is gonna have HBO-style R-rated sex, so you can wear nudity covers, there’s not gonna be full-frontal, but pretty much everything else is fair game, and you better be comfortable with that and be comfortable enough in your sexuality, and if you’re freaking out about that, then don’t even bother coming in to audition’. It’s such an important part of what this show is. So that process weeded out a lot of people who would’ve found it weird. For the people who were interested in the show, it wasn’t a surprise, and they understood what the show was and the sensibility of it and what we were trying to do. So doing all those scenes was really not hard at all, it was just another day at the office. It was actually really cool in the sense that the whole cast was so amazing, and besides being so unbelievably gorgeous, they’re just such great actors, they’re so talented, they have so much emotional range, and they very much were collaborative with me in that they wanted to achieve my artistic vision. It was such a cool experience for me to work on this show and I was so grateful to all of them.

Do you think that LGBTQ representation in mainstream media is at a good place now? Or do we still have a long way to go?
I think it’s definitely progressed a lot. When I was at Sundance with my first film in 1992, which was The Living End, it was such a huge deal to have two guys make out on screen. I remember that film being so punk rock, because this was before Will & Grace and before Brokeback Mountain, it was very new, and so to go back to Sundance in 2019 with Now Apocalypse, which has these queer characters who don’t give a shit and everybody’s just who they are, and it’s a Starz show on TV and it’s being broadcast around the world, it’s such a marker of the progress we’ve made and how far we’ve come. Obviously there’s always room for more, but again, it’s awesome in terms of what’s going on with #MeToo and improved representation for people of colour, because those are the stories that are interesting to tell, and people are so tired of the straight white male story. Like, ‘I’m the nerdy straight guy and I’m in love with the beautiful girl at my high school’. I can’t watch that movie anymore. I’ve seen it too many times. That’s why I think it’s great that there are so many other stories being told, and that a lot of those are LGBTQ, the whole spectrum.

Now Apocalypse is available on STARZPLAY from 10 March, 2019.