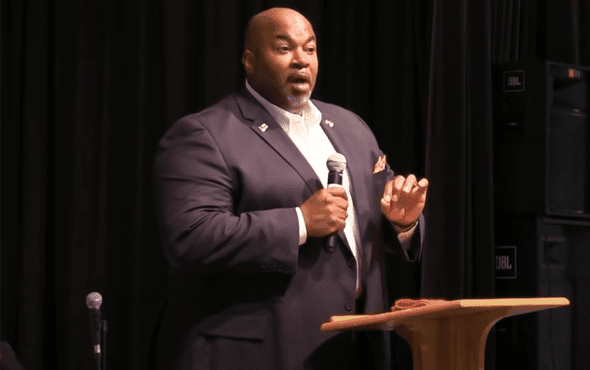 Republican Lt. Governor Mark Robinson is refusing to resign despite his inflammatory comments made towards the transgender community.

A video of Robinson’s comments were recorded and released online by Right Wing Watch, which shows the Lt. Governor speaking at the church, WRAL reported.

Right Wing Watch is self-described as a “project of People For the American Way”. The advocacy group aims to monitor and exposes the activities of Radical Right.

“I’m saying this now, and I’ve been saying it, and I don’t care who likes it: Those issues have no place in a school. There’s no reason anybody anywhere in America should be telling any child about transgenderism, homosexuality — any of that filth,” Robinson said,

“And yes, I called it filth. And if you don’t like it that I called it filth, come see me and I’ll explain it to you. It’s time for us to stop letting these children be abused in schools, and it’s not going to happen till the people of God stand up and demand different, same ones that established those schools to begin with.”

North Carolina Lt. Gov. Mark Robinson says Christians must take control of public schools because children are being abused by being taught "filth": "There's no reason anybody anywhere in America should be telling any child about transgenderism, homosexuality, any of that filth." pic.twitter.com/aXjCPFKTs0

John Wesley Waugh, a spokesperson for Robinson, told NBC News that the lieutenant governor’s use of “transgenderism” directly “refers to education.”

“Topics surrounding transgenderism and homosexuality should be discussed at home and not in public education,” Waugh said.

“We must focus on reading, writing, and mathematics in North Carolina. Our students have struggled with these topics even before the pandemic. Our primary focus needs to be helping our students succeed, not on topics that should be discussed at home.”

Speaking on Robinson’s comments, Gov. Cooper released a statement emphasising North Carolina’s inclusivity: “North Carolina is a welcoming state where we value public education and the diversity of our people. It’s abhorrent to hear anyone, and especially an elected official, use hateful rhetoric that hurts people and our state’s reputation.”

There's no debate here. This is open discrimination. It is completely unacceptable.

Democrat senators Jeff Jackson and Wiley Nickel have publicly called for Robinson to resign. The White House said his remarks were “repugnant and offensive.”

“I stand with the LGBTQ Community and hope you will join me in condemning this hate speech from the most senior Republican elected official in our state,” Nickel posted on Twitter last Friday.

I agree with @JeffJacksonNC. Mark Robinson is a disgrace and an embarrassment to our state – he should resign immediately.

I stand with the LGBTQ Community and hope you will join me in condemning this hate speech from the most senior Republican elected official in our state. https://t.co/AckGzuIdA3

Robinson is known for his intensely anti-LGBTQ+ perspectives, particularly on Facebook.

The Lt. Governor has issued controversial comments such as saying being gay is a step before paedophilia.

Robinson also made discriminatory and insensitive comments following the 2016  shooting at the gay nightclub Pulse, in Orlando, Florida, where 49 LGBTQ+ people were killed.

“First, let me say that I pray for the souls of all those killed, healing for all those wounded, and comfort for the family members of the terrorist shooting in Orlando,” Robinson posted on his Facebook page following the attack.

“However, homosexuality is STILL an abominable sin and I WILL NOT join in ‘celebrating gay pride’ nor will I fly their sacrilegious flag on my page. Sorry if this offends anyone, but I’m not falling for the media/pop culture ‘okey-doke.'”

LGBTQ advocates have argued that Robinson’s views are not representative of the majority of North Carolinians.

A 2019 poll, from Public Policy Polling, revealed that 67 per cent of voters in North Carolina support pro-LGBTQ+ legislation, with only 19 per cent in opposition.

Allison Scott, the director of impact and innovation at the Campaign for Southern Equality, an LGBTQ advocacy group based in North Carolina, said Robinson’s comments remind her of the insults the LGBTQ community regularly endured a decade ago.

“They are shocking in their brazen homophobia and transphobia and are as unacceptable now as they were 10 years ago,” she said.

“Our state has been on a journey, and more than a dozen cities and counties have successfully passed protections for LGBTQ people. It’s time for all North Carolinians to come on this journey toward a future where no one faces discrimination or harassment because of who they are.”