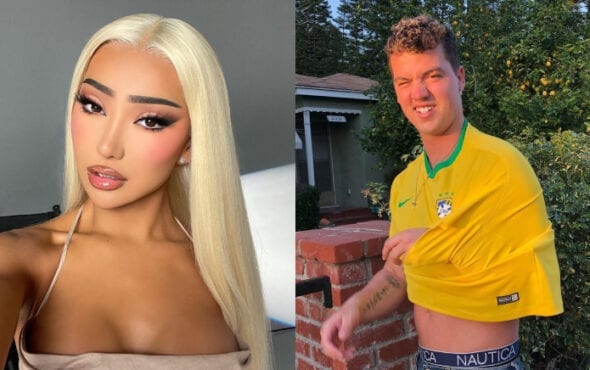 Nikita Dragun has hit out at social media star Taylor Caniff for his vile, transphobic video.

The video in question, which circulated online earlier this week (15 June), saw Caniff making transphobic remarks against Dragun and claiming he’d outed her as trans to security guards at an event they both attended. Several times, Caniff referred to Dragun as a “dude”.

After it sparked outrage online, Caniff seemingly addressed the controversy with a video showing him listening to Daniel Powter’s Bad Day. In a second video, Caniff claimed his “clout-ridden” friends leaked the clip and his disgusting, anti-trans rhetoric was just a “joke”.

Following even more backlash to Caniff’s ‘explanation’, Dragun broke her silence as she tweeted: “This man is on his live saying I’m doing this for clout and he’s bisexual…  Sir you haven’t been relevant since Magcon. Sit your TRANSPHOBIC ass down.”

In a later tweet, Dragun said she ‘fears’ being around men due to her trans identity, “let alone date one publicly,” before explaining how the man escorting her to her car in the video is now “at risk for being involved with a trans woman”.

Caniff, who boasts over two million followers on Twitter, didn’t respond kindly to Dragun’s comments. He quote-tweeted the former GAY TIMES cover star and threatened to “leak some real info”, claiming she’s been “doing this [since] 2015”.

“You would hate that, you change to trending seasons. Keep changing for clout. I speak FACTS. What I said was facts,” he added.

this man is on his live saying i’m doing this for clout and he’s bisexual… sir u haven’t been relevant since magcon. sit ur TRANSPHOBIC ass down. it’s sad i even gave u any kind attention @taylorcaniff

You want me to leak some real info nah you been doing this 2015?! You would hate that, you change to trending seasons ….Keep changing for clout. I speak FACTS. What I said was facts. https://t.co/8HFOnKgcrr

i fear even being around a man as a trans woman. let alone date one publicly. his life now is at risk for being involved with a trans woman. it’s so sad.

Dragun went into more detail about the incident in a video posted to Instagram, titled STOP TRANS HATE, where she shared Caniff’s initial clip and explained how transphobic comments, such as his, can endanger the trans community.

“This is what it’s like to be trans. My livelihood is constantly threatened by living my life as a trans person and I’m so embarrassed to even be showing this video, but it’s reality. It’s what’s really fucking happening in the world,” said Dragun.

“I try to be strong for you guys and hold my head up high and act like I’m not terrified that something like this will happen to me. This is how trans people die.”

Dragun then spoke out against the epidemic of violence against trans people, saying: “Next time it could be somebody else, somebody not as lucky.

“We must stop trans hate because it leads to trans violence and people lose their lives. Even worse, they take their own lives. Experiencing things like this just breaks my heart and my entire world and it’s disgusting, and I won’t stand for it.”

Tana Mongeau, another internet personality, called out Caniff four years ago in a video titled ‘Taylor Caniff is a transphobic piece of sh*t’, which is now doing the rounds on social media.

You can watch Nikita Dragun’s video here or below.