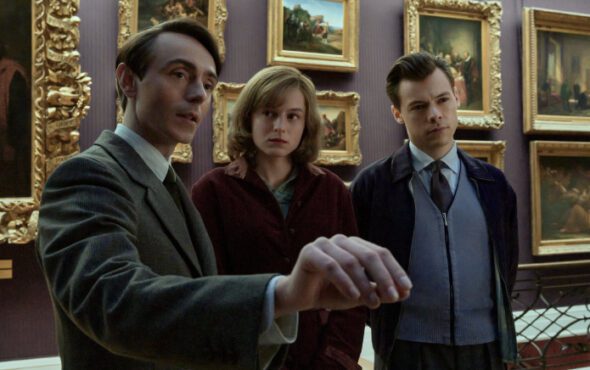 Prime Video has shared the release date for their highly-anticipated gay drama My Policeman.

Based on the acclaimed gay novel of the same name from Bethan Roberts, set in 1950s Brighton, the film stars Emma Corrin as Marion Taylor, a schoolteacher who falls in love with a police officer named Tom Burgess (Harry Styles).

After meeting museum curator Patrick Hazlewood (David Dawson), however, Tom finds himself torn between both lovers. Due to social constraints of the era, Tom decides that it is safer to marry Marion.

The film will be told in flashbacks, with older versions of Tom, Patrick and Marion being played by Linus Roache, Rupert Everett and Gina McKee, respectively.

According to an exclusive first look from Vanity Fair, Prime Video will release My Policeman in cinemas across the US and UK on 21 October and on streaming worldwide on 4 November.

The publication also shared two brand new stills, one of which shows Styles and Corrin lounging in a pool and another of the pair with Dawson in a museum.

In the interview, director Michael Grandage said Styles’ limited experience in the film industry was an advantage in bringing the character to life.

“Because he hasn’t done much, he hasn’t developed the ability to work out tricks or even lie. He can only do it truthfully and as he knows it,” he explained.

“They just bring themselves to the role, and it seems to be very uncomplicated in the way they achieve it and Harry had that.” He also shared details of Tom’s arc in the film, saying he’s a “confused” character and this is “made more problematic by the fact that he’s a policeman” and in a career that is “about upholding the law”.

“And the law in the country at the time is about everything he feels—the complexity of it is something that whoever was going to play younger Tom and older Tom needed to somehow understand and absorb,” said Grandage.

The director also praised Styles for his professionalism, saying he read the script “so many times that he knew every single beat of it” when they first met.

“He knew other people’s lines; he knew all of his lines. He knew why he wanted to talk about it, why one scene worked this way and another worked,” he continued.

“This story is about two people that are in love with Tom, slightly obsessed with him. Harry—the world is so transfixed on him, on his every move.”

My Policeman is produced by Philip Herd, Cora Palfrey, Sarah Schechter and Greg Berlanti, best known for his work on television dramas such as Dawson’s Creek, Brothers & Sisters, Chilling Adventures of Sabrina and You, as well as The CW’s Arrow. He also directed Love, Simon.

Robbie Rogers, who made history as the second footballer in Britain to come out as gay after Justin Fashnau, is also attached as a producer.

In the interview, Rogers admitted that My Policeman was “kind of like my coming out book” and that Bethan Roberts’ story “found me”.

You can read Vanity Fair’s exclusive piece on My Policeman with director Michael Grandage here.