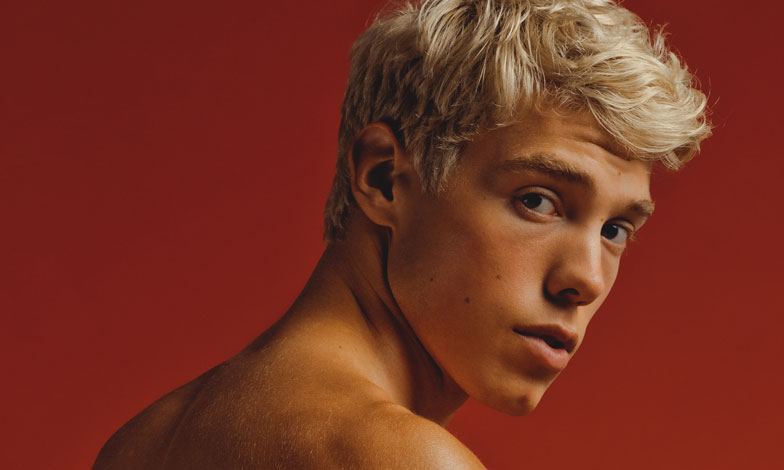 As he covers the August edition of Gay Times, the 23-year-old model, actor and emerging musician has spoken exclusively about his sexuality on record for the first time.

“I would identify now as gay… I think I realised vaguely at school that I was gay, like officially. There was a point that I just knew,” the former Urban Outfitters poster boy and Scream Queens actor told Gay Times.

“I have a very private life, and because I haven’t been out, I’ve been nervous about people seeing my personality because I didn’t want them to jump to conclusions about me without knowing my whole story.

“It’ll allow me to be more personable on social media. I’ll be able to post more on my stories and videos on Twitter… it’ll allow me to stand up on the stage in front of the LGBTQ community and not feel so pressured about, ‘Oh my God, I wonder they think of me’, or, ‘I wonder what they’ll think of me’.”

The August edition of Gay Times is available to pre-order today here.

Speaking about his sexual identity, Derek’s hopeful talking publicly today will help support queer teens of tomorrow, and the journey to discovering their truth.

“Coming out in this way allows me to use the privilege that I have to help other people who don’t have that. The opportunities that I’ve been given to have a voice,” explains the Instagram favourite, who has surpassed over 270,000 followers on that platform alone.

“I feel like that was the main reason why I wanted to do this cover. I want to be the person that’s at those rallies and events advocating for people and anybody. I never felt that I could do that unless I did this, and I think this is a major way for people to see visible queer people.”

Derek adding: “If I can just inspire one person, whoever that is, to be their true self or do something they were scared to do or didn’t feel 100% confident in, that would be the most rewarding part of all this. Helping that one person, they can then go on and hopefully help someone else that’s in the same situation as them, and it’ll keep going on and on. Being honest and being who you are is always the best way to live.”

Elsewhere, Derek reveals the harsh reality of being the victim of ‘gay shame’, his families difficult journey to accepting his sexuality, and the importance of LGBTQ representation within the social activism era of 2018.