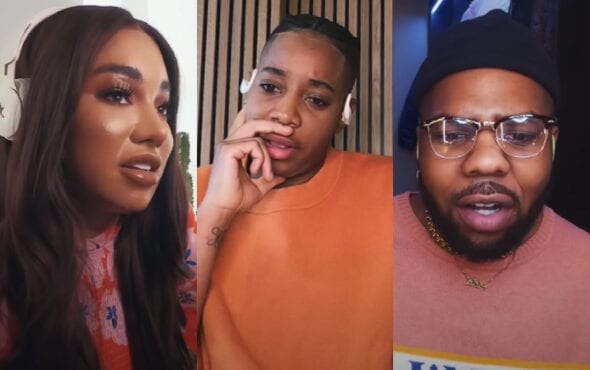 MNEK and Munroe Bergdorf are the latest guests to appear on Beats by Dr. Dre’s INFORMAL.

Hosted by Dotty, Apple Music’s Lead Culture and UK Black Music and Apple Music Host, the new series brings together leading figures in the UK to discuss trending topics that are important to Black British communities.

INFORMAL builds on the latest campaign from Beats, titled You Love Me, which celebrated Black culture and resilience. It featured guests such as Wretch 32, Unknown T, Mo Gilligan, Shaybo, Eva Apio and Temi Mwale.

On this week’s episode, Dotty speaks with musician MNEK and trans activist Munroe Bergorf about the impact of Black LGBTQ+ culture, as well as their status as role models within the Black LGBTQ+ community.

During their conversation, MNEK said he felt the need to be a “martyr or this person of great importance” for both communities due to his high-profile status, but came to the realisation that his actions “do that more” .

“I think when I’m being myself, and I’m not worried about the way it looks, I think a lot of people find a lot of comfort in that,” said the star, who topped the UK Singles Chart in 2020 with his Joel Corry collaboration Head & Heart.

MNEK continued to say that he appreciates all of his mainstream success and being able to “communicate with people”, but it’s even better when fans are able to relate to him and his journey as Black LGBTQ+ person.

Munroe said it’s important for people to remember that role models are not perfect human beings.

“It’s a fully formed person that is trying to do their best, and I make mistakes just like everybody else. But, I like to think that it’s really about how you acknowledge those mistakes and grow from them,” she explained.

The former GAY TIMES cover star reflected on how much “shame” she felt in regards to her sexuality, gender identity and race, as she was constantly told “those things weren’t beautiful, valid and acceptable.”

“It’s only during my early to mid 20s that I started to figure out, actually, all of this is a projection from other people and there’s nothing wrong with me,” she continued.

“But it’s only really now that people are starting to say that in the mainstream.”

Dotty also reminisced on her childhood, and how she didn’t have many Black LGBTQ+ inspirations in the media.

“All I saw was the princess going for the prince, and I was never the prince, so it’s funny how everybody wants to bash the queer agenda until it’s time to be inspired,” she said.

MNEK and Munroe Bergdorf’s episode of Beats by Dr. Dre’s INFORMAL is now available to stream on YouTube.

You can watch the episode here or below.