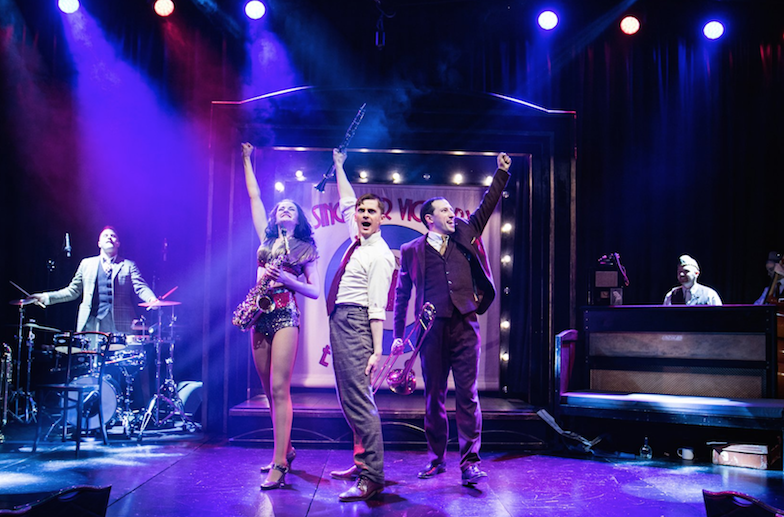 Miss Nightingale tells the tale of aspiring northern singer Maggie Brown, her songwriter George, on-off boyfriend Tom and the wealthy war hero Sir Frank, who has set up a new club The Cockpit to keep morale up during the war. Sir Frank, looking for a star, is wooed by Maggie’s northern charm and big voice and offers her the opportunity to play the titular Miss Nightingale in his cabaret show.

There are two narratives running in parallel – the more straightforward affair between Maggie and Tom, and the complicated and, due to the circumstances of the time, clandestine romance between George and Sir Frank. Theirs is a really touching story line and it’s wonderful to see such an authentic and sensitive LGBT encounter on the West End stage. At various moments the two stories collide and relationships are built, broken and rebuilt – for the most part it’s very believable and nicely observed.

As charming a tale as Miss Nightingale is, the real star of the show is the music – there are a lot of songs here of which the majority are great, with a number of standout moments. An early highlight is Meine Liebe Berlin, performed by George (Matthew Floyd Jones) – it’s a beautifully composed piece of music with some intelligent and unexpected rhymes, a homage to the great city during the Weimar Republic era.

In addition to that more serious number, Miss Nightingale is full of humour and there are two particularly hilarious songs gifted to Maggie (Lauren Chinery), both of which had the audience howling with laughter. Granted, The Sausage Song and The Pussy Song – yes, those are their actual titles – are going to win precisely zero awards for subtlety, but both are deliciously filthy and choc-full of witty gags.

Related: The Inheritance: An extraordinary and astonishing look at gay lives – review

Maggie performs The Pussy Song – a protracted innuendo about accidentally trapping a pet in the door but is, of course, referring to a very different type of pussy – entirely facing away from the audience, in a pained pose which makes it look like she’s actually trapped her pussy in the… well, we’re sure you can work it out. We won’t spoil The Sausage Song, but suffice to say it has countless hilarious punchlines and a particularly enjoyable moment where a pair of glasses is inserted… somewhere.

For all its brilliant moments – and there are plenty – we did have a couple of minor issues with Miss Nightingale. While the story is, for the most part, very believable and has some poignant moments, we did feel these were let down by the script on occasion; a few exchanges were a bit clunky or reverted to cliche. We also felt a like there were a handful too many songs – we’d much rather have a smaller collection where every one is a hit, as opposed to a longer set where a few miss the mark.

Don’t let that put you off – we still had a lot of fun with Miss Nightingale. While it may fall short of being incredible, it’s still a really great night out with some wonderful performances, brilliant songs and a wickedly funny sense of humour. We laughed, we cried, we laughed until we cried. Well worth checking out.