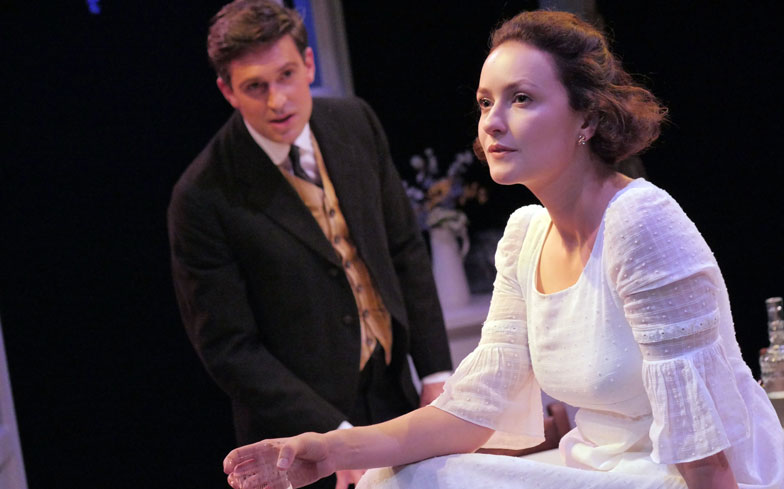 This new adaptation by Howard Brenton has transferred to London’s Jermyn Street Theatre.

Miss Julie, one of the original kitchen sink dramas, shocked and astounded the audience at its premiere in Paris in 1893. While it’s unlikely to have a similar impact on a contemporary crowd, it’s still a powerfully-performed new production of Strindberg’s classic. Opening earlier this year at the Theatre by the Lake in Keswick, it has found a cosy new home in London’s Jermyn Street Theatre.

Set in Sweden on Midsummer’s Eve, it tells the story of Julie, who gatecrashes the servants’ party on her father’s estate. What begins as lighthearted flirtation with the valet, Jean – engaged to be wed to Kristin, the cook – rapidly escalates into a fight for survival. Intense, visceral and at times difficult to watch, it held our attention for the 90-minute duration.

It’s a sharp dissection of class, money and social mobility, loaded with sexual tension. Sometimes fast-paced and gripping, other times completely unafraid to draw out the more intimate moments, the pacing feels just-right throughout.

The production is solid – the limitations of the tiny space are, for the most part, artfully masked, while the sound design really sets the scene of a warm evening, replete with birdsong, distant music and the voices of revellers passing by. The impressively-constructed kitchen allows for real meals to be cooked on-stage, absorbing us in its sights, sounds and smells – we really felt as if we were looking into someone’s house, watching their story unfold.

The acting is pretty impressive throughout, too. Charlotte Hamblin, in the titular role, strikes a fine balance between haughty and coquettish; James Sheldon, as Jean, delivers a believable mix of arrogance and ambition; while Izabella Urbanowicz offers a comparatively refined and dignified performance. It’s an interesting blend and one that works extremely well.

Miss Julie won’t be to everybody’s tastes. It’s frequently heavy-going with some challenging moments, and aside from a handful of witty lines it’s generally pretty light on humour. The space itself does have some limitations, too – although this production makes good use of the resources available.

Overall, though, we enjoyed this new production – it kept us gripped throughout and the acting is generally very strong. For fans of Strindberg, this is absolutely worth investigating.