Miriam Margolyes captivating in Sydney and the Old Girl – review 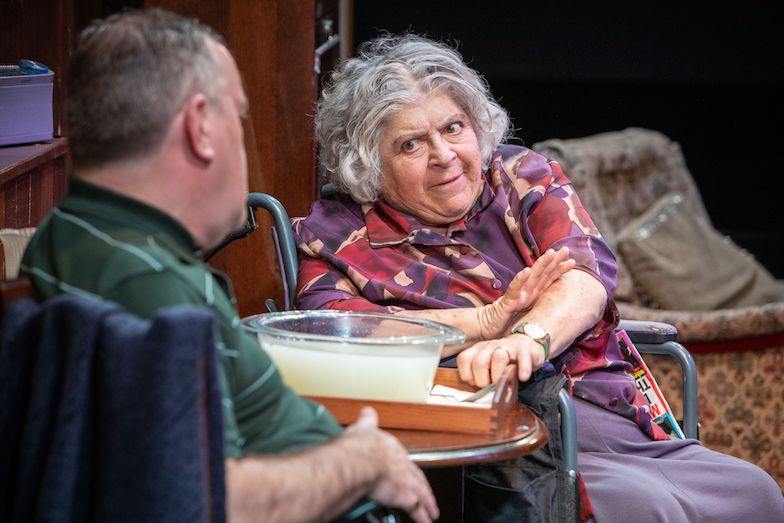 Earlier this year we went to check out Eugene O’Hare’s previous play The Weatherman, which also made its debut at the Park Theatre. Like Sydney and the Old Girl, his previous work was billed as a dark comedy, but we found the emphasis was much more on the dark than the comedy – which remains the case here. Similarly both plays are relatively dramatically thin but once again the playwright has written some excellent characters and dialogue, allowing his superb actors plenty of opportunities to demonstrate their ample talents.

It’s a fairly straightforward story. Nell (Miriam Margolyes) is an elderly lady largely confined to her wheelchair, who lives in a cramped east end house with her middle-aged and socially maladjusted son Sydney (Mark Hadfield). Theirs is a co-dependent relationship full of mutual loathing; while they despise each other’s company, she relies on him to look after her, while he wants to keep her on-side as his future depends on inheriting her estate. We are also introduced to Nell’s part-time carer Marion (Vivien Parry), the only vaguely pleasant character we encounter during the show.

The setting and pace of the piece has echoes of Endgame by Samuel Beckett, which is presumably an influence given his play also features an elderly lady called Nell – although Beckett’s is confined to a dustbin, not a wheelchair. Not much actually happens over the course of two and a half hours – it’s mainly a protracted argument, a game of point scoring between the ill-suited pair in which Marion becomes the unwitting pawn, played by both sides, each trying to involve her in their own scheming ways.

The tone of the play is rather bleak. Both mother and son are evidently quite unpleasant characters, with racist and homophobic undertones bubbling to the surface. On occasion there are a handful of moments which seem to be shock value for the sake of it, but for the most part the writing keeps their problematic traits in the subtext. The play contains a few quite intimidating, borderline violent instances too – which are uncomfortable to watch, but generally are in keeping with the nature of the characters.

While the play itself may have shortcomings, the quality of the acting really carries the show. It’s a tour de force performance from Miriam Margolyes; she utterly dominates the stage and is captivating throughout. Mark Hadfield seems a little insecure on a handful of lines but for the most part impresses as her verbal sparring partner. Vivien Parry brings some much-needed kindness to proceedings, although her part leans a little heavily on silly stereotypes. While the play sometimes oversteps the mark into being a bit nasty, all three are capable of employing humour to lighten the tone at an appropriate moment.

We did enjoy our time with Sydney and the Old Girl, but we left the theatre feeling that was more to do with the performance rather than the play itself. We’d happily recommend making a trip to the Park Theatre in order to see the superb Miriam Margolyes in such an intimate setting, but we’re not convinced that the show would still impress if she wasn’t in it.