Middle is a bit of a muddle at National Theatre – review 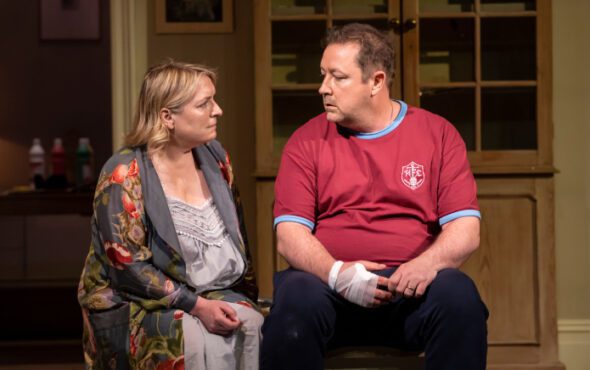 We had high hopes for David Eldridge’s new play – the second part in a trilogy, Middle follows on from 2017’s Beginning, which we caught when it transferred to the West End and we absolutely loved it. A cleverly-constructed two-hander, over the course of 100 minutes we gained an insight into the beginnings of a potential romance – guy meets girl at a house party, a conversation ensues, one thing leads to another and… well, you know how it goes. Beginning was a play overflowing with clever lines, dripping with subtext, and very relatable and human exchanges.

Middle follows much of the same formula – here we have another 100 minute two-hander, and the whole play is once again just a conversation between a man and a woman that unfolds during the early hours of a morning. This time, however, we’re introduced to middle-aged couple Maggie and Gary. Almost in her first breath, Maggie tells her husband that she doesn’t love him any more; what ensues is a conversation about how her life hasn’t turned out how she wanted, how they’ve drifted apart, and starting to consider what a future might look like if they were just friends.

Unfortunately, it just doesn’t feel as compelling or as engaging as its predecessor. Beginning had us hanging on absolutely every word; Middle has some interesting moments and a handful of exchanges which really captivated us, but it didn’t grab us like Beginning did. It also just feels like a bit of a muddle – it seems too humorous to be dramatic, too flippant to be serious, and at times a little contrived. The character of Gary seems inconsistent, too – that’s on the writing as opposed to the acting. We should credit the two performances here – Claire Rushbrook and Daniel Ryan are excellent as our central pair in what are two very demanding roles.

Don’t get us wrong – we still enjoyed our evening with Middle. 100 minutes passed quickly enough, and it does contain a few smart observations. It’s only disappointing in comparison to the towering brilliance of its predecessor – as a standalone play it’s entertaining enough. We were just hoping for more.