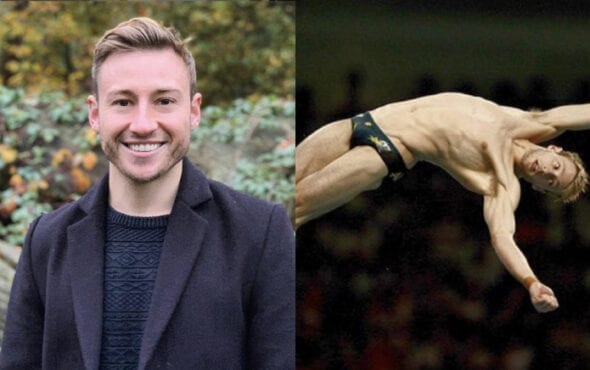 In an in-depth interview with BBC Sport, Matthew Mitcham discusses his coming out journey, revealing his experience with depression and addiction.

Mitcham’s journey started at a young age when he realized he liked boys while attending catholic primary school.

Due to societal views, and pressures from his classmates and teachers, the Olympic athlete tried to “train” the gay away.

“I was so scared of it that I would actually tie a rubber band around my wrist and every time I had a gay thought I would snap it to try and associate pain and suffering with the gay thought. To try and train myself out of being gay,” he revealed.

As a form of escape, Mitcham focused on diving, which helped him free his mind, but his dedication to the sport quickly took a self-destructive turn.

“Diving became this darkness which permeated the rest of my life. I really hated it, but I knew it was my one chance to be special, so I kept going effectively on autopilot,” he said.

Over the years he found himself getting involved in drugs and binge drinking in an effort to escape his thoughts and depression.

“It was a relief, escapism and a way of shutting my brain off for a few hours, but it kept escalating.”

After some time away from diving, Mitcham returned to the sport, with sights on a comeback and an Olympics debut.

“I cut out everything that was unhealthy- obviously the drugs and alcohol- but also junk food and soft drinks because I didn’t want to jeopardise a chance to reach my first Olympics,” he said.

Before making his way to the legendary sporting event, Mitcham came out as gay in 2008, ahead of the Olympic Games in the Sydney Morning Herald.

Matthew went on to make history in the 2008 Beijing Olympic Games, becoming one of the first-ever openly gay men to win Olympic gold. As it stands, his winning dive, which scored, 112.10, is the highest-scoring single dive in Olympic history.

After the success of his 2008 Olympic win, Mitcham revealed that he went through another hard patch after finding out he was ranked number two in the world.

“It shouldn’t have, but it sent me into a downward spiral of crippling self-doubt again because I’d had this obsession about being the best in the world.

“Being an Olympic champion made me feel even worse because I had no right to feel that way when I had the world at my feet,” he explained.

It wasn’t long till he found himself in rehab to get clean.

Fast forward to 2021 and Matthew Mitchman has overcome his struggles and shining brighter than ever.

“I’ve been hard on myself throughout my life, but I look back with kinder eyes now, and I’m proud of not only what I won but being able to do it al as an openly gay man because of the oppression that is still felt in so many countries around the world,” he said.

Since retiring in 2016, Mitchman has continued to live his best life, falling in love along the way with Luke Rutherford.

In 2020, Mitchman married Rutherford at the Chateau de Halloy in Belgium.

“After a sustained period of lovely gestures, loyalty, gazing adoringly and many trips to Ikea, I managed to trick @lukeyluke8 into falling in love with me, proposing to me and finally marrying me. Now he’s stuck with me forever and ever, ha!” he wrote on his Instagram.

We stan Mattew Mitcham’s incredible journey as a gay man and athlete.