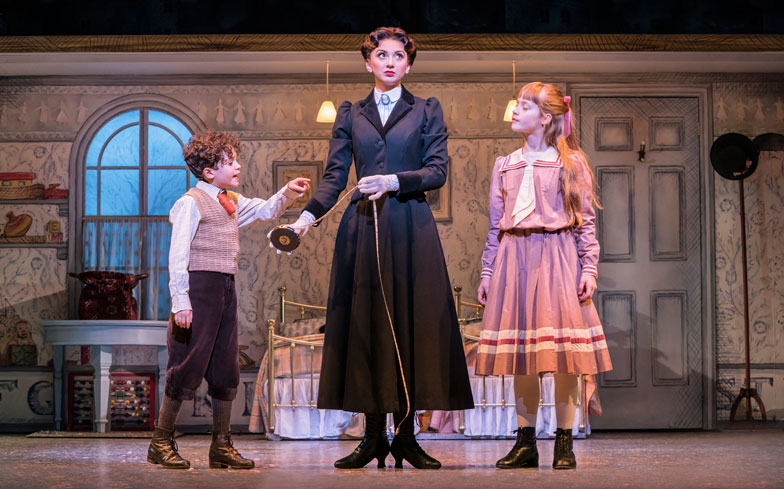 Oh it’s a jolly holiday with Mary Poppins. Not a statement, but a fact. Thankfully the magic continues as the world’s most famous nanny is still practically perfect. Playing her is no easy task, but actor Zizi Strallen steps up to the mark with joyous ease. Doing anything but copying the movie version from queen Julie Andrews, Mary here is a little firmer to start before easing into loving the Banks children come final flight.

Housed in a pop-up mansion that opens to reveal inside Cherry Tree Lane, the infamous residence of the Banks family, this new production of Mary Poppins is one continuous gasp as you travel from house to bank to even rooftop. And up there, high about the house (quite literally in act two) is Charlie Stemp, as chimney sweep, Bert. Cheeky in face and character, there’s a lot to like from Mary’s friend that lifts this show from being a little heavy on any children watching. The whole toys coming alive vibe.

However nobody dazzles quite like superstar Petula Clark as the Bird Woman. In voice and sparkling star quality, she’s the definition of class as Feed The Birds rings out through the theatre – her applause the greatest of the night.

From Step In Time to Practically Perfect, this production of Mary Poppins is like a dose of sugary perfection. Along the way, we meet friends, family and moving statues as Mary Poppins reminds us all why she reminds one of the greatest stories to be told. And if all that isn’t enough, as Mary takes flight as the close of act two, there won’t be a dry eye left in the audience, from either child nor adult!