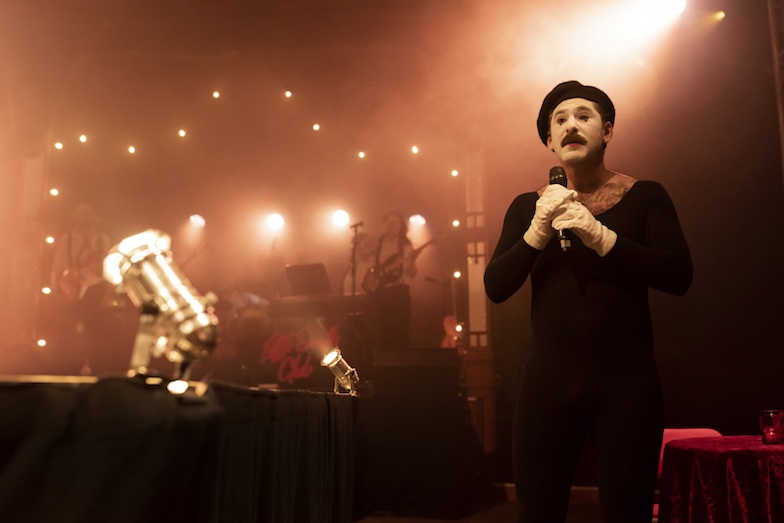 Bernie Dieter and her travelling family of misfits set the stage alight – quite literally – with this exciting punk cabaret show at the Underbelly Festival.

The moment we walked into Little Death Club we knew it was going to be more of an immersive experience than a traditional theatre show. The four-piece funk-rock backing band were already playing, while members of the troupe adorned the stage in a variety of seductive poses. We’d been warned that real fire would be used in the performance. The moment that the lights dimmed and Bernie took to the stage, there was a palpable sense of anticipation in the Spiegeltent.

We were not disappointed. The bombastic opening number saw Bernie, on fine form with one of her original songs, indulge in a playful Weimar-era cabaret number, featuring an abundance of intimate audience interactions (those in first few rows beware). Over the course of an hour, she introduced us to a variety of performers she claimed to have picked up during her travels.

Highlights included contortionist and aerialist Beau Sargent, who elicited audible gasps from the astonished audience by doing things with his body that we never thought possible. Drag artist Myra Dubois, the self-proclaimed Siren of South Yorkshire, indulged in some entertaining rapport with her unsuspecting victims before delivering an entertaining rendition of her signature number – one half of classic duet I Know Him So Well. Meanwhile the fire breathing antics of Kitty Bang Bang quite literally set the stage alight towards the show’s finale.

The only act we weren’t sold on was Josh Glanc’s disgruntled and disillusioned mime artist. He was mildly amusing, and the sketch where he begged an audience member to trap him in an actual box drew some laughs, but this performance didn’t seem of the same calibre as his fellow artists. We weren’t quite sure whether it was meant to be weird or funny – it wasn’t particularly successful at either. In a show of extremes it felt a little tame.

This was a disappointing moment in an otherwise excellent show. Little Death Club is a wonderfully indulgent throwback to the glory days of the Weimar Republic, featuring a deliciously subversive sense of humour. Well worth checking out.