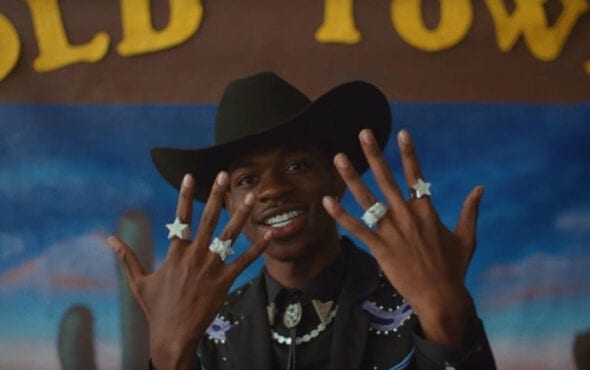 The star’s number one country-rap anthem, Old Town Road, has been awarded its 14th platinum certification in the United States, becoming the most certified single in history.

In response to the news, Lil Nas X excitedly wrote on Twitter: “OLD TOWN ROAD IS OFFICIALLY 14 TIMES PLATINUM! MOST PLATINUMS FOR ANY SONG EVER! LETS GOOO!”

He later became the second openly gay man, after Elton John, to earn a diamond-certification for a single.

Lil Nas X has scored two more major hits on the Billboard Hot 100 since: Panini, which has been certified 4x Platinum; and the Cardi B/Nas-assisted country-trap anthem, Rodeo.

OLD TOWN ROAD IS OFFICIALLY 14 TIMES PLATINUM! MOST PLATINUMS FOR ANY SONG EVER! LETS GOOO! pic.twitter.com/JsqUdIapfQ

It’s unsure whether the latter will be included on his highly-anticipated debut album, which he called the “greatest album of all time” at the Billboard Music Awards last year.

The album is expected to include Call Me By Your Name, an upbeat rap track that he teased on social media earlier this year, as well as Titanic, One of Me and Don’t Want It.

Lil Nas X has also ventured into children’s books with the release of C is for Country.

According to a statement from Random House, the book is “perfect for music lovers learning their ABCs and for anyone who loves Nas’s signature genre-blending style.”

C is for Country is now available in stores.