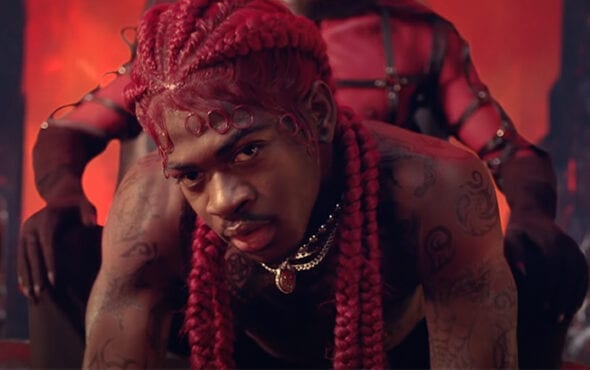 Today is a good day because we finally have the long-awaited new single from Lil Nas X.

The hype for MONTERO (Call Me By Your Name) has been huge since the star teased it on social media last year (even getting early praise from Rihanna herself), so expectation has been high. Naturally, Lil Nas X doesn’t disappoint.

Not only is the track an absolute bop, it hears Lil Nas X stand in the full power of his sexuality as a queer man, chronicling his personal journey through judgement, temptation and acceptance.

The accompanying music video takes it further, with biblical and ancient Greek references seeing LNX travel from the Garden of Eden down to the depths of Hell, via a stripper pole while in heels, of course.

It’s a blockbuster of a music video that challenges the status quo, is powerful in its queerness, and unapologetic with its message.

“The story opens in a lush Garden of Eden where Nas first introduces the theme of duality, which is displayed throughout the video,” an official description from his record label reads.

“He plays the role of Adam as well as the snake that tempts him into giving in to the carnal desires he was forbidden to explore, and we see the two merge and become one. Following a nod to Plato’s Symposium displayed on the tree of life, a shackled up Nas finds himself at his execution day in the Colosseum, where he is surrounded by and receiving judgement from various versions of himself.

“Once he has been executed, he ascends to heaven only to be pulled down to hell where he harnesses his sexuality to seduce the devil and strip him of his power as an evil force—and dismantling the throne of judgement and punishment that has kept many of us from embracing our true selves out of fear.”

Lil Nas X co-directed the visual with Tanu Muino. It was produced by UnderWonder Content with visual effects by Mathematic.

LNX also posted a message on Instagram to his 14-year-old self, explaining the importance of this moment for other queer people.

He added: “You see this is very scary for me, people will be angry, they will say I’m pushing an agenda. The truth is, I am. The agenda to make people stay the fuck out of other people’s lives and stop dictating who they should be.”

Montero (Call Me By Your Name) was produced by Take a DayTrip, Omer Fedi and Roy Enzo, ands is available to download and stream now.

Lil Nas X has been busy working on his debut full-length album which he’s previously said is “98% done,” so we should expect to hear more from it later this year.