Laverne Cox in conversation with Peppermint 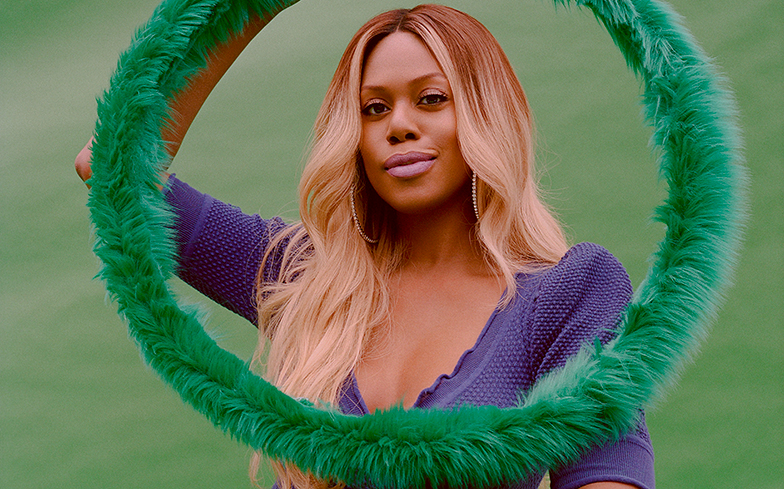 The definition of a trailblazer for trans women, and particularly trans women of colour around the globe, Laverne Cox has pierced the world with her unapologetic truth.

Here, she sits down with Drag Race royalty Peppermint to discuss navigating her gender identity during her youth, racism within the queer community, white privilege, and the empowering message behind her #TransIsBeautiful hashtag.

Peppermint: First I want to say congrats on the success on everything.

Peppermint: … but particularly the international success of Glam Masters. It’s a big thing to be a part of and Kim Kardashian produced. Can you tell us what that’s all like?

Laverne: I had so much fun shooting Glam Masters. It was silly but also really serious for the contestants. Working with Kim was amazing, and all my judges; Mario (Dedivanovic), Kandee (Johnson), Zanna (Roberts Rassi) were all absolutely incredible. I had a really awesome time and to see everybody react to the show and all the influences. I’m really grateful I got to do it.

Peppermint: How has opening up the conversation about trans beauty helped a more mainstream audience learn about our collective beauty?

Laverne: The great thing about Glam Masters is that we had such a diverse group. We had all different races including a trans makeup artist and guys doing makeup on themselves. What’s great about the beauty industry right now and social influencers is that everyone is in the game no matter what your gender identity or expression is, you’re doing makeup on yourself. Having a show like Glam Masters with such gender diversity was an awesome thing to show everyone that you’re beautiful and you can wear makeup no matter who you are or how you identify. And then the added conversation around trans beauty. We still need to be empowering trans folk to think beyond the binary and to embrace ourselves no matter how we look or where we are in our transition. I think there’s still these cis-normative beauty standards that we hold trans people up against and next to, and that’s deeply problematic. I started the #TransIsBeautiful hashtag to empower trans folk to love all the things that make us uniquely and beautifully trans. It’s not about embracing cis-normative or white supremacist beauty standards, but about embracing what you got going on.

Peppermint: I think the #TransIsBeautiful hashtag is probably one of the most popular ones I’ve seen on social media, so thank you for that. It really caught on and people who I know, who I’m sure don’t even know you started it, are using it and I think that’s really important. I know there’s a lot of young folk who are seeing your examples and other trans folk today who didn’t have a show like Glam Masters, or even social media growing up to see other people and other great examples. I know you didn’t have that. What was it like growing up for you in Alabama?

Laverne: Much of my experience was me wanting to get out of Alabama as soon as possible. I was there but my head was always like ‘I’m going to move to New York’. I was myself as much as I could be at the time, I knew I couldn’t fully be myself in Alabama. I knew I had to get out to flourish. I think back now and there’s a lot of people like me who can’t get out or don’t have the option to leave. We have to make places safer for trans individuals, non-conforming people, for people of colour as racism is still… in America it’s a thing, globally a thing, but in the American south, it’s really bad. When I think about my childhood, I was in walking distance to the public library so I spent all my time at school and then would go home and immediately head to the library. In third grade I took dance classes and did talent shows and went to church. I was the kid who was active. That was my life growing up; dreaming about being out of there and doing what I’m doing now.

Peppermint: I hear that girl. So, when did you begin to question your gender identity?

Laverne: I was just always me. I was always really feminine and a lot of it was when I noticed other people saying stuff. When I started interacting with the other kids in pre-school and was called a ‘sissy’ and the f-word, I was bullied, chased home from school, and people said that I ‘acted like a girl’, so that’s when I noticed I was different – when other people continually told me I was different. My third grade teacher called my mother on the phone and famously said, “Your son is going to end up in New Orleans wearing a dress if you don’t get him into therapy right away.” I went into this reparative therapy of sorts – that was awful, horrible and shaming, and that was a moment that really instilled in me that I shouldn’t be as feminine as I was and should try to act differently. I did, kind of, but couldn’t really help myself and who I was. After that therapy experience, I had so much shame about knowing I was a girl. I always knew I was a girl and it was something my therapist knew. The therapist asked me if I knew the difference between a boy and a girl and I said that “there is no difference”. The reason I said that was everyone was telling me that I was a boy but I knew I was a girl. I knew in my heart, soul and spirit so I reasoned there mustn’t be any difference. I couldn’t explain it beyond that, and then my mother yelled at me. I internalised so much shame because of my therapist, my mother and my teacher, and everyone trying to ‘fix’ me. It wasn’t until I moved to New York and met real trans women that I was able to accept I was a girl – to let me stop running from it. My transition, for me, was about moving out of denial and moving into acceptance about who I am. You might be able to relate to that a little bit girl?

Peppermint: Absolutely. For me, I had the same experience of trying to get out, leaving home and getting to New York as I knew that was where I wanted to be, and who I wanted to be with. I can definitely identity with that. Peppermint: We hear almost daily the name of another trans person murdered in America, and particularly trans women of colour. Why do you think this is still happening, and is there any way you think we can begin to prevent it?

Laverne: When I look to the work like the Anti-Violence Project in New York, a lot of their research lets us know that violence against trans people, LGBTQ people, and particularly trans women of colour is because of intersectional oppression. A lot of these trans women who are experiencing violence is often they don’t have a place to live so there’s an issue of homelessness we have to address culturally. There’s the intersection of racism and sexism and trans misogyny. It’s about dealing with racism culturally, and also sex work. Trans women who are doing sex work are more likely to experience violence as well. Trans people are being forced into survival sex work so that’s another reason. At the end of the day, we haven’t had enough of a cultural shift where we can believe and understand that trans women are women. That is at the heart of why we’re being murdered.

Peppermint: One group who can understand a different side of the patriarchy and how it intersects with race are cis gay white men. What do you think their role has been or should be in helping us normalise trans women of colour, and trans folk in general?

Laverne: The privileged gay man. I think a lot of it has to start with interrogating our own privilege. It’s such a buzz phrase that people don’t really want to talk about, but we cannot really talk about diversity if we haven’t interrogated our own location, where we are coming from, or how we approach a subject matter. We have to first interrogate our own privilege and the ways in which we are privileged by this system. Then we have to be willing to step out of place, and once we do that, how do we begin to then elevate the voices of the people who are most marginalised? Sometimes it really helped when we know someone who is trans. For me as a black trans woman, how do I begin to elevate the experiences in America of those who might have a disability or who might be undocumented?

Peppermint: I think it’s also important for people to realise that trans folk don’t all have the same experience… Laverne: It’s always both. Social media and the internet in general has connected trans people in ways which we’ve never been connected before, and we’re able to network in ways we weren’t able to do 15 years ago. There’s a sense of community we can have because of the internet. Unfortunately, social media means people feel emboldened to anonymously bully other people. We see stuff going down in the comments section and… I feel like because you’re my girlfriend I want to curse.

Laverne: There’s shit going down in the comments section where people are so mean and hateful to each other. That’s an unfortunate side effect of social media, but free speech brings that and we have to learn to fortify ourselves when all that comes at us; I’m saying that to myself now. I try to stop reading when I see negative stuff and I don’t ever engage with anything negative – that’s super important.

Peppermint: The United States has been an example in some ways for LGBTQ rights and people lifting up trans voices. There is, however, people in other parts of the country and the UK who have the opinion that – under the political climate and current administration – certain voices are being emboldened in a particular way. There’s potentially messages being sent out that America has become a harsher place – what would you say to those people?

Laverne: Well I think it’s hard not to believe that considering folks are feeling emboldened. White supremacists are feeling emboldened in ways they haven’t before because of the current administration. I like to remind myself and remind everybody that the current President of the United States won by about 80,000 votes across three states. It’s not a lot of people, and his opponent won the popular vote. That reminds me that it’s important for every person to turn out and vote and let our voices be heard. It’s a call and reminder that, just because we have rights now, it doesn’t mean those rights won’t be rolled back.

Peppermint: Love is, for a lot of people, a key component for Pride. What does Pride mean to you?

This interview first appeared in the June 2018 issue of Gay Times.