Instagram model Kyle Krieger on using his privilege to help others 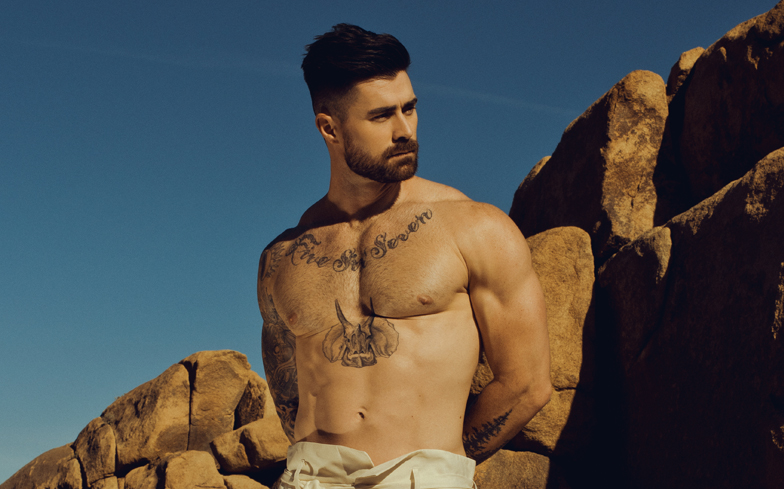 If you’re an Instagram obsessive, you’ve no doubt heard of Kyle Krieger – or at least seen his immaculately curated profile. With over 1.2 million followers, Kyle is one of the most popular LGBTQ creators on the platform, but he’s far more than just a (ridiculously) handsome face.

“Have you read Janet Mock’s article in Allure on ‘Pretty Privilege’?” he asks. “You should. It’s real and I understand that I benefit from it, especially online.” It’s this privilege, as well as being a white cis male, that Kyle capitalises on to raise awareness of inequalities faced by the entire LGBTQ community as well as other oppressed groups.

Here, Kyle opens up not only about his life as an Instagram sensation, but also his battles to overcome addiction and the success of his first ever short film Boyfriend.

As one of the most followed LGBTQ activists on Instagram, do you feel pressure to be a spokesperson for the community?
I don’t think I’ve ever felt pressure to be a spokesperson, I think of it as a responsibility. I also realise I’m not the most eloquent person, so I stick to my strengths with photo and video. With some luck and some hard work, I’ve garnered the attention of a lot of eyes online. And look, I get it, I fit the universal type and I fall within the boundaries of the social standard of beauty. That gives me a lot of privilege based on the way I look. So it would be such a shame if I didn’t use my online platform as an opportunity to amplify underrepresented, marginalised voices who may not have the same privileges because of the colour of their skin, the way they look, their education, sexism or their socio-economic status.

I believe we all rise together, and I just really want to do the best I can with what I have. And if that means helping to rally the community for marches and protests, sharing stories with photos and video, and living a visible life as an out gay man as an act of resistance, so be it. I’m here for it.

Many of the photos you share celebrate your body and male nudity. Is there a message behind this, or are you simply expressing yourself in a way you feel comfortable?
I guess it’s a little bit of both, right? In the beginning of my recovery from crystal meth and alcohol, I needed a creative outlet to put some energy into. I picked up a camera and I was too insecure and scared to ask to take someone else’s photo so I just turned on the self-timer. There was something so healing about going out on an adventure to cool locations, finding interesting light, figuring out how and where I would shoot, thinking of a pose, and then editing the end result. It was such a healing process and I enjoyed the quiet, alone time so much.

But I guess the message is love yourself, wear whatever you want or don’t wear anything at all. Don’t listen to opinions of people who want to tear you down. Go with whatever makes you feel fully expressed. It’s about experimenting with your body in terms of expression which includes lines, shapes, shadows, everything. It allows me to almost deepen my relationship with my body, while hopefully encouraging others to do the same with their own bodies and their relationships with them. I still have my own insecurities and battles with self-worth and self-acceptance. Finding some healing through creativity is one outlet I choose to practice.

With all those followers, you must have plenty of guys sliding into your DMs. Does that bother you?
You know what, I have to be honest, my DMs are a very kind and loving place. Yeah, I get a few dick pics and the occasional hole pic, which always makes me throw my phone across the room. But for the most part I have people from all over the world
messaging me about a video that touched them, my TED talk that helped them fight their addiction, or a certain photo that inspired them to shoot something that they loved. It’s the most wonderful experience.

I love how we can have a connection with someone who we’ve never met, but can share with them how they’ve impacted our lives for the better. I very rarely get any hate or unkind messages. Your first short film, Boyfriend, is showing at the BFI Flare Film Festival in London this year. What does this acknowledgement mean to you?
I couldn’t believe it really. I mean, this is the first film I ever directed – I really had no idea what I was doing. It felt so authentically validating. Ten years ago I was cracked out living on an air mattress, barely paying my electric bill, visiting the bath house, smoking crystal meth and having sex with strangers. I had no friends, little family contact, was kicked out of college, and had nothing to live for except getting high. And in that one moment it just felt like I had come so far from there. I was so proud of myself.

As well as helping to promote LGBTQ rights, you’ve also expressed support for women’s rights and the Black Lives Matter movement. How important is it that oppressed groups band together like this?
As someone who lives everyday benefitting from white male privilege I see it as my responsibility to be an ally to oppressed groups. It is so important to centre the impacted, listen and learn from those who are oppressed, yield the floor by not speaking over someone and letting them share their own experience. Racism and sexism continue to be toxic forces this country. I refuse to sit around while white people are silent on the unequal advantage they have over people of colour.

It’s important to remember that #BlackLivesMatter isn’t about discrediting other lives. It is about giving the same level of respect to black people that white people get automatically. It’s important because they need our help. They understand that all lives matter, but all lives aren’t in danger right now. Black lives are disproportionately being targeted and killed and it’s going to take all of us to stop it.

Aside from your activism, you’re also known for your insanely good grooming habits. What advice do you have for men looking to step up their game?
Stop washing your hair so often. Invest in a good blow dryer! And if you cannot articulate what you want your hair to look like, bring a picture to help you navigate your consultation with your stylist. If the stylist gives you grief about it, go to someone else or come to me. They should want you to look and feel your best.