Kim Petras on the importance of Pride: “Sometimes it feels like things are going backwards” 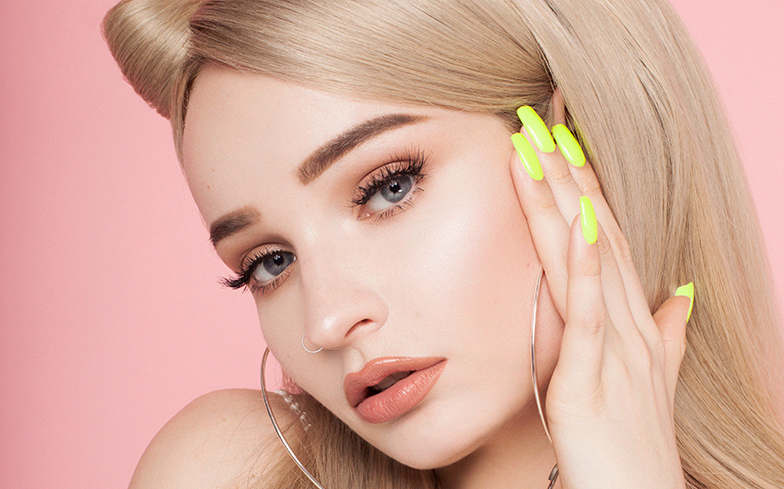 Kim Petras might be one of the world’s most famous trans pop stars, but she doesn’t want that to define her.

“There were people who would ask me in meetings whether I was transgender because it’s ‘trendy’ right now,” she tells Gay Times in between between her first sold-out show in London and a performance at Birmingham Pride, despite being placed on vocal rest by her doctor.

It’s worse back home in Germany, Kim says, where the media refuses to see her as anything other than transgender. “I just went back there and they were like, ‘So do you miss having a dick?’,” she explains with exhaustion. It’s the reason you won’t find songs about gender identity in her already-impressive catalogue of feel-good bops.

We caught up with the pop princess to talk about discrimination she’s experienced in the music industry, what we can expect from her debut album, and her brilliant new stadium-ready single Can’t Do Better…

Congratulations on your first sold out London show! How was that experience?
It was great! Really hot and really crazy, but yeah, it was pretty good. I was really scared all day because my voice has been acting up, I’ve been travelling like crazy and the AC really got to it, but I got a steroid shot and pulled through.

Why do you think Pride is still so important in 2018?
I just think it’s a really cool thing to come together and think about all the progress that we’ve made in the history of the LGBTQ community, and to celebrate the achievements we’ve made instead of all the negative shit, which there’s a lot of lately. Sometimes it feels like things are going backwards, but that’s why I think it’s so important to celebrate your community and be proud. I love it.

When you were trying to get into the music industry, did you ever face discrimination for being trans?
Yeah, for sure. There were people who said, ‘I can’t work with this girl because it’s against God and she’ll go to hell’. There were people who would ask me in meetings whether I was transgender because it’s ‘trendy’ right now. So yeah, definitely, you face shit. But at the same time I feel like producers and other songwriters and artists, they’ve been so accepting and amazing about it. I’d usually not tell them and they’d Google it and find out and be like, ‘That’s super awesome that you’re transgender’. So yeah, there’s two sides: The really supportive people, and the really shitty people.

Do you ever worry that people put too much focus on your gender identity, instead of your music?
For sure, yeah. When I put my songs out at the beginning, it was just the neon logo, it wasn’t even my face. I was pretty much anonymous on Spotify, and my song still went to number one on the viral chart. I spent the last eight years of my life really working hard on myself and becoming good at something, and believing in myself and overcoming doubt. I went to Los Angeles really broke and didn’t know anybody, I just hustled my way through, so I’d love for people to be like, ‘That’s really dope that she came up with a really unique sound and point of view’. I’d love people to see that about me. But at the same time I’m super proud of being transgender, I love the rest of the community and I feel super inspired by them. So it’s a weird line to walk. I totally wanna help the transgender community, the suicide rate is so ridiculously high, and it’s so difficult when you don’t have supportive parents. I want to be a good example, but I don’t want to be known just for being transgender, to the point where I’m not allowed to be anything else. A lot of people, especially growing up in Germany, they wouldn’t let me be anything else but transgender. Even now, I just went back there and they were like, ‘So do you miss having a dick?’, and ‘So are your boobs fake?’, and ‘So did the surgery hurt?’ It’s just like… wow. Sometimes I feel like people can’t take my achievements seriously because I’m transgender. But other people do, my fans do, and I’m really excited about that. There’s been such an increase in trans awareness in the media of late, but when you were growing up did you have anyone from the community to look up to?
I mean, I saw documentaries about it on TV when I was a teenager, but there wasn’t really anyone polarising I guess. I was really obsessed with RuPaul and the drag community, though, and I loved Dr. Frank N. Furter in the Rocky Horror Picture Show. I just always loved free spirits I guess. But no, nobody comes to mind. I mean I knew about Amanda LePore, but I was like 14 or 15 at the time so… yeah.

How’s work on your debut album going?
Really great, yeah! It’s pretty much done, I have all the songs for it. I could drop it any time really, but I’m just focusing on the singles for now. Heart To Break just went to radio in America and Germany, so I’m trying to give that as much momentum as possible. Once you drop an album it kind of takes the focus away from the singles, so I want it to have the best shot it can have, and promote the shit out of it.

Your approach to releasing music is different from most, where you’re just releasing great singles after great singles instead of EPs or albums – how much of that is a response to the way the music industry is changing?
I think it’s inevitable that the industry is going to change, and streaming has turned everything upside down, but I think it’s really inspiring to see young independent artists – like, I’m unsigned and I’m with AWOL which is Artists Without A Label, so I basically have my own label – and I think it’s interesting to look at urban artists who are dropping mixtape after mixtape and loads of singles and collaborations. I don’t think you can ever stop and take a break anymore, but I think it’s a really cool way to release something month by month to keep people excited, especially in the beginning phase of a career. Every song is standalone and getting a shot at success which is a great thing. I feel like that makes every song very special. And also I just feel like there’s no room for album tracks anymore, you know? I feel like they all have to be bangers. Not that I’m saying I only do bangers, but I feel like every song should be looked at and perfected as much as possible.

Your last single Heart To Break was such an amazing song, but how are you going to top that?
Well, I’m not really trying to top it… but ultimately yes I am trying to top it. I never want to repeat myself, and I never want to do anything like what I’ve done before, so the next song is completely different, it’s a little slower. It’s called Can’t Do Better, and it’s a song about having a crush on a dude who has a crush on another person, and being like, ‘You can’t do better than me!’ while also being really insecure about yourself. It’s a cute song, it has huge sonics, and it’s really 80s stadium sounding. I’m pumped for it. So yeah, I have a bunch of stuff that sounds nothing like the other songs, but still kind of fits into that world. The other half of the album is so exciting.

What do you think the recipe for a perfect pop song is?
Well, I think at the core it has to be something that’s meaningful to you and something that’s relatable, something that makes people feel emotions. But also simplicity, the right parts, really catchy melodies, and crafting it to make sure every second of it is good. Who were your musical icons growing up?
Freddie Mercury, Britney Spears, the Spice Girls, Destiny’s Child, JoJo – she’s amazing – Cyndi Lauper, even people like the Pussycat Dolls, Billy Idol, and Kanye West. Also Gwen [Stefani] from No Doubt and Madonna, I love early Madonna shit and Confessions On A Dance Floor was a big one for me. Obviously Gaga when The Fame came out, that was fucking crazy. It changed my life. I was like, ‘Eyeliner and cigarettes, that’s like my life’. I have so many idols, I stan so many pop girls. I’m just a total pop stan!

Paris Hilton was in your music video for I Don’t Want It At All – are you two besties now? Because I see her liking your Instagram posts all the time…
Yes! We see each other occasionally, she’s really cool with me. We text about random things, we invite each other to things, and I promised I would write a song for her which I will definitely do. She was just really fucking cool. That was my first single, I had nothing else out there, and she was like, ‘I love the song, I wanna be in this’, and so it was really the perfect scenario, it was the perfect fit for her, and it just made total sense. So then I met her, and she was the sweetest coolest person, and really down to earth. You could talk to her about anything and I feel like she’d be real about it. She was nice to the whole crew, to my whole team, she brought pictures for the Paris Hilton shrine, she was just on it. She was super cool.