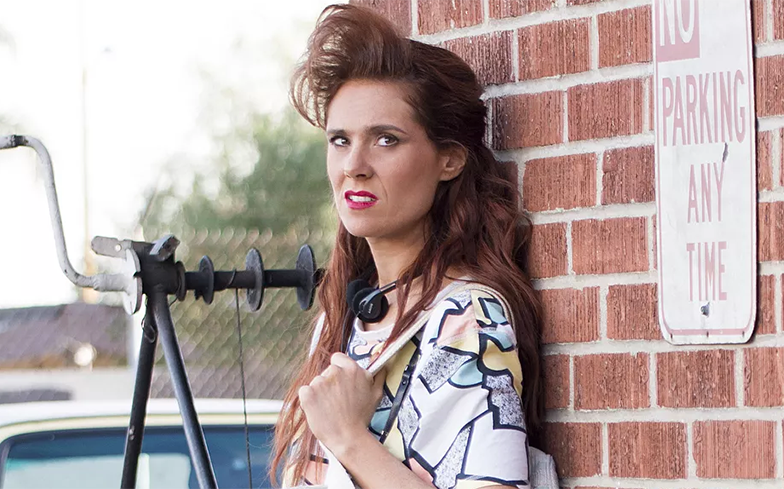 “We don’t need to fight for fucking straight people.”

Kate Nash has launched a scathing yet necessary attack on the right-wing bigots behind ‘Straight Pride’.

Over the weekend, London’s ultimate pop extravaganza, Mighty Hoopla, returned for its third consecutive year in Brockwell Park and welcomed some of the music industry’s most legendary performers to their various stages.

Shortly after Kate performed her most iconic hits on the main stage – such as Foundations, Life in Pink and Dickhead – she joined GAY TIMES and Hunter in the VIP area, where she was interviewed by sickening drag performer Petite Lamé.

When asked about her thoughts on ‘Straight Pride’, she passionately said: “I think that concept is ridiculous, bullshit, offensive, stupid, pointless, crap, rubbish, shit and needs to not happen.

“I think it’s trash, trash, trash – it does make me really angry that people feel the need to celebrate being arseholes.”

Kate continued: “There’s this weird thing happening where people feel a threat because we’ve made some steps forward, and they’re like, ‘No! What about me?’ Your life is already completely fine and no one’s fucking with you.

“It’s just really offensive and needs to be stopped. The real Pride is about people being able to be their true selves, no matter who they are, and about fighting for equality and for people who don’t have equality.

“We don’t need to fight for fucking straight people.”

Kate also shared her experience at Birmingham Pride earlier this year, telling Petite: “I had like 15 drag queens sing with me for Foundations. My mum and dad came, and my dad was holding a friendly sperm cardboard cutout.

“It was such a good vibe. I feel like recently there’s been things going on that makes me realise how we take for granted being in London, like our city being open minded, but there’s been some things recently that’s made realise the importance of Pride.

“We’re in our own bubble, we can be our true fabulous selves, but not everyone gets to do that.”

This year, Kate released Trash, the first single from her forthcoming fourth studio album. She is also set to reprise her role as Rhonda in the third season of Netflix’s GLOW, which is scheduled to premiere on 9 August.

While Kate couldn’t tell us much about the season, she did reveal: “We filmed it and I’m so excited for it to come out. I think it’s our best season yet. It’s exciting! As usual, Rhonda is keeping it British – in Vegas this time.”