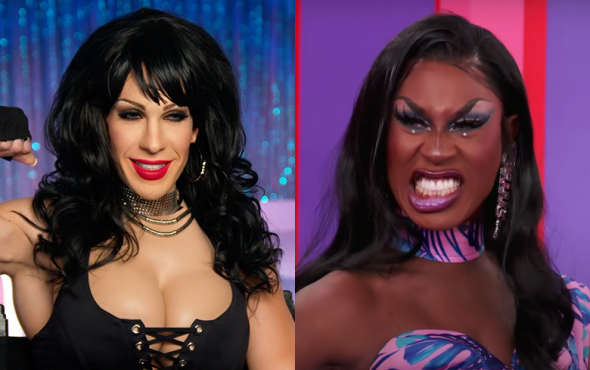 “You can imagine my joy from watching her slay at home instead of slaying me.”

Kameron Michaels is relieved that she’s not competing against Shea Couleé on RuPaul’s Drag Race.

Following last week’s episode of All Stars 5, in which Shea conquered over the rest of her competitors – and lip-sync assassin Vanessa Vanjie Mateo – the season 10 alum praised her performance on Twitter and spilt some T at the same time.

“I was pretty uneasy about ending up competing against @SheaCoulee in All Stars,” she wrote. So you can imagine my joy from watching her slay at home instead of slaying me #FIERCE.”

Does this mean Kameron was asked to sashay back into the werkroom for All Stars 5? And she rufused to ruturn because she knew Shea was strong competition? Or maybe she turned down the lip-sync assassin role? There’s a lot to unpack here.

As of writing, Shea is the frontrunner for the crown this season with two maxi-challenge wins under her belt and two lip-sync wins. Miz Cracker and Jujubee are the only remaining contestants to have won a maxi-challenge.

Next week, the queens will fire up the grill and join RuPaul’s family for the Charles Backyard Ball, where they will strut down in the runway in two sizzling looks. Bebe Rexha makes her judging debut, alongside RuPaul’s sisters Rozy and Renae.