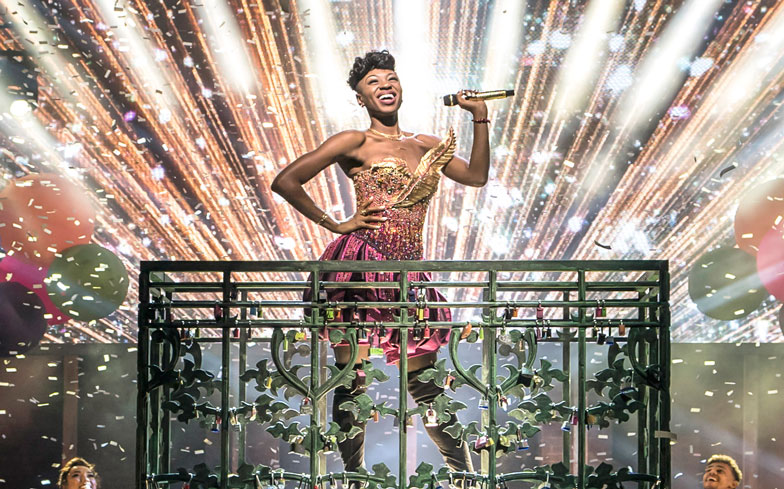 & Juliet is exciting. “You don’t really get stories like this on stage. This is something different,” says leading lady Miriam-Teak Lee, who plays Juliet.

And she’s right. Not only is this a show brought to the stage by music genius Max Martin – think Domino, Problem, Since U Been Gone – but it’s ushering in a new world for queer representation on stage, where the previously ignored stories of sexual and gender identity aren’t a secondary thought or an unexplored side moment, but front and centre.

From queerness to non-binary identity and pansexuality, it’s all here in the story of what would happen if Juliet – of Romeo and Juliet fame – decided not to die for the love of a man. That’s right, this is Shakespeare remixed as Juliet takes control.

In an exclusive conversation, we speak to Miriam-Teak Lee (Juliet), Arun Blair-Mangat (May), Tim Mahendran (Francois) and David West Read (book writer) about working with chart-topper Max Martin, what stars like Britney Spears might think of them rediscovering their music for a new audience, and how & Juliet helps end years of the LGBTQ community being erased from leading musical narratives.

Romeo, who? Giving Juliet her own voice must be the most liberating feel ever?

Miriam: [Laughs] It really is. I could have never though that I would be in a situation like this, it’s literally like a dream. To sing these pop songs in a West End show with a new concept is like breathing new life into these incredible songs. I literally can’t believe it every day.

Arun: I’ve been telling people that it’s the perfect hybrid of going to a pop concert and a musical. I don’t think I’ve ever been a part of a show that dares to mash those together and create this epic and interactive experience. The creative team have done this brilliant job of realising this as I didn’t know how it was going to sit when I did a reading of it two years before. I thought we’d go down the theatre route, but actually it blends the theatre and pop concert genre together so perfectly.

Tim: This is a new twist on William Shakespeare’s Romeo and Juliet. It’s about Juliet waking up, deciding not to kill herself and deciding to live her life. It’s her journey of what would happen next. You meet a huge range of characters including the nurse from the original tale, May, and they go on this trip of a lifetime to Paris… and everything unfolds from there.

Do you think it being disruptive to the traditional musical theatre model is why people are going crazy for it?

Tim: There are moments in the show where people do think they’re in a pop concert. It’s because of the way we’ve set it, the lighting, and when people like Arun as May gets to sing I’m Not a Girl, Not Yet a Woman, it’s this stunning moment. You then flip that on its head to when we sing the Backstreet Boys and there’s these pop concerts lights going on the audience as well.

Arun: We’re constantly breaking the fourth wall and are inviting the audience in. They’re not spectators, they’re players like us, so it’s allowing everyone to have a party. There’s moments of comedy and real emotional brilliance.

David: May is an essential character in & Juliet. In setting this show in 2019, it was really important to me that our cast of characters reflect the diversity of the world around us as much as possible, and that included gender, age, body type, ethnicity, and sexual orientation. And since the original play Romeo & Juliet is very much about rebelling against the rules of a rigidly segregated society, and questioning identity (“What’s in a name?”), it seemed like a natural extension to write a new friend for Juliet who refuses to be defined by traditional labels. There are obviously many great musicals that portray non-heterosexual relationships, and more recent musicals that explore gender and sexual fluidity, but in most cases, it’s THE subject of the musical. With & Juliet, I wanted to feature a non-binary character whose love story is treated with the same weight and consideration as the other love stories, while not being the sole focus of the show.

Tim: I’ve never played a role like this before. A lot of the interviews it’s been Francois finding out who he is. He is a possible love interest for Juliet, but he meets May and it’s not that he’s gay… he’s pansexual. He’s completely besotted the first time they meet when they bump into each other on the dance floor. It’s a split second but there’s something there. There’s this whole scene of proposing and him and May get this time alone and there’s this connection. Francois is oppressed by his father and he throws these parties asking him to marry. Francois wants to get married but then when he meets May, that’s what he really wants. It’s about saying that this isn’t what I want, but this person. I’m straight and my dad said to me after the show, ‘Have I ever made you feel like that?’ He hadn’t, but he said that it does make you think about it. Not only for people of our generation coming to watch and accepting who they are which is a gift in itself, but hopefully inspire the older generation and give them an insight into what life is like now – how 20 years ago.

And talking about identity beyond just gay and straight, or your given birth gender.

Arun: It’s so developed and way beyond anything that I’ve seen before. I’m looking at the tapestry of the West End with this, Everybody’s Talking About Jamie – come on! To be alongside those is amazing.

May sings I’m Not a Girl, Not Yet a Woman, made famous by Britney Spears. What do you think she would think the song having a new life in the show?

David: I would hope that she’d like it? It’s a beautiful arrangement, delivered with such integrity by Arun Blair-Mangat, and even though it’s a loaded context because of who this character is and where they are in their journey, I think it stays faithful to the original spirit of the song; it’s still fundamentally about a young person trying to figure out how to be an adult in the world, and struggling with self-definition.

Miriam: People are resonating so much with May’s story, so much. The use of the song, Not A Girl, Not Yet A Woman is poignant and strong with May trying to discover who she is, alongside Juliet reassuring her that she doesn’t need to find a title but just be who she wants to be and that’s absolutely fine.

What do you hope the inclusion of this storyline does to those of a similar experience?

David: I hope the inclusion of this storyline speaks to people with a variety of experiences. Because both Juliet and May are creations of Shakespeare’s wife, Anne Hathaway, they have an aspirational quality to them. They reflect Anne’s hope for a society in which people are freer with their choices and self-expression. And I think that’s why, in Manchester, we felt tremendous support from audiences for May’s story, even though, technically, May is betraying Juliet for a good portion of the show! Because, hopefully, most of us are also striving to make the world a more accepting and inclusive place.

Miriam: You don’t really get stories like this on stage. This is something different, being non-binary and new gender identities are being spoken about today and you don’t always get that seen in theatre. People often don’t know how to handle it, how to talk about it, and I think this is done so beautifully because it doesn’t put a label on who and what May is. We don’t out a label on her, she is just Juliet’s best friend. It’s incredible that we can have a story for her that is brought to the forefront.

Do you think the West End is doing enough to to represent queer people and actors of colour?

Miriam: I think it’s getting better. I think there’s definitely more stories and roles that don’t have to do with a specific ethnicity. As a black woman, it’s great to tell stories that anybody could portray and that’s what’s so wonderful and playing Juliet is that it doesn’t matter who was going to play Juliet. It doesn’t matter who is playing her, it’s about new life. More stories like this need to be told and I don’t think are there yet, but I think it’s going in the right direction.

Arun: Ethnicity, sexuality, gender. The characters are fully fleshed people who have arcs and are multifaceted and flawed. I’m so honoured to be able to play a gender-queer character in a musical in a commercial space. This just doesn’t happen.

Max Martin’s music is loved and celebrated by the LGBTQ community. Why do you think they’ve connected to his music so much?

David: I wouldn’t want to try to speak on behalf of the LGBTQ community, but I know that Max has made a point of working with artists who would identify as either members or allies of the LGBTQ community. And I would imagine that the sense of empowerment in so many of Max’s songs (“Roar,” “Stronger,” “Confident”) has particular appeal to any group that has been disempowered or marginalised by society. Also, so many of his hits are about universal themes like falling in love or getting your heart broken, and no matter who you are, or how you identify, it’s pretty easy to identify with that.

Miriam: It’s crazy because you don’t even know what to expect meeting him. He’s so relaxed and loves us putting our own spin on them and the ideas we have. He’s never trying to make it sound like anybody else but works with your strengths – which is amazing.

You sing Britney’s …Baby One More Time as a ballad before it builds into a full belt pop bop. It’s two different versions of a song we love.

Miriam: It’s amazing to get to do that. You know that people already love the song because people know it, but we’re going to change it in a whole new way and make you feel different things about it. It’s dramatic, the drum beats that show her heart added in, it’s a whole feel for it all.

We all know these now chart-topping hits. Does the audience loving the song and lyrics mean extra pressure?

Arun: For me, it was a level of excitement. Max has created the soundtrack to mine and so many lives so having that wealth of music for our book writer David West Read to pull from and weave inside this story was incredible. So I don’t think it’s pressure because we are breathing new life into these songs. Max has been so incredible and involved that he’s almost rediscovering these songs from a new point. And we also haven’t changed the lyrics.

Tim: We also did a workshop in February this year and invited people across five showings. They did that because they wanted feedback. The only feedback on songs is that people wanted more of them. There’s a time where Since U Been Gone was part of a mashup and was a verse and chorus, but now the whole song is in there. Same with Everybody.