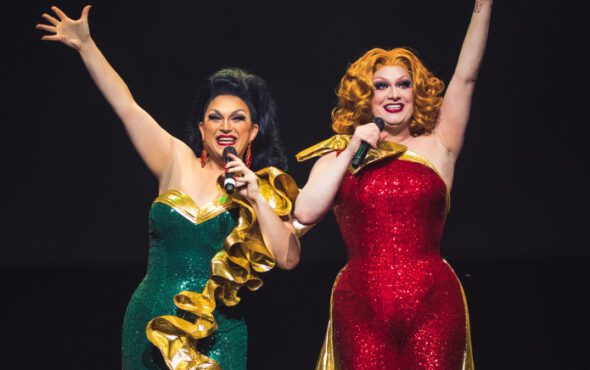 RuPaul’s Drag Race alumni Jinkx Monsoon and BenDeLaCreme have brought their festive show to the UK for a tour this winter.

It may be hard to believe given we pretty much lost the first four months of 2021 to lockdown, but the end of the year is now rapidly approaching, and with it lots of Christmas shows are popping up at theatres up and down the country. We caught the lengthily-titled Return of the Jinkx & DeLa Holiday Show Live! at London’s Troxy as part of a UK tour which will see the iconic queens performing in several UK cities before returning to the states in December.

The premise of the show is pretty straightforward – the two queens are playing an odd couple, with DeLa swept up in the charm and excitement of the holiday season, while Jinkx is intent on calling out Christmas as a capitalist sham. It works well – the duo have an evident affinity for each other and their on-stage chemistry is a delight to watch. It’s a cleverly-written and well-paced show – there’s a clear plot and narrative structure, the jokes are genuinely very funny, the original songs are inspired.

There are numerous highlights – we were thoroughly entertained by a play on ‘Away In A Manger’ which, in an ode to anonymous sex, has now become ‘A Gay And A Stranger’, with a brilliant punchline which means we’ll never be able to look at gingerbread the same way ever again. There are countless laugh-out-loud one-liners and some amusing (and deliberately naff) PowerPoint presentations. VT clips punctuate proceedings while our queens are off-stage changing into any number of glamorous looks and are genuinely pretty funny. 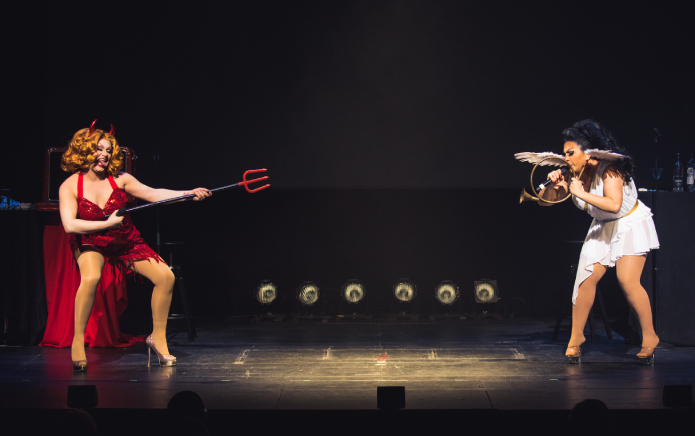 Our only real issue with the show was the venue itself – it didn’t feel like a good fit for a performance like this. The sound isn’t brilliant in the Troxy, so for a performance which relies on the audience being able to clearly hear every word – it wasn’t ideal. The songs sounded fine but there was definitely room for improvement. Additionally, this is an absolutely cavernous space and the production is relatively small scale – yes the screen is used now and then, and there are occasional moments of choreography, but for the most part this is two drag queens on stage telling jokes. It felt like it needed either a more intimate venue or bigger production values.

That aside – the show itself is great fun and we had a really good night. Jinkx & DeLa have such a natural affinity on-stage and really know how to work an audience. The jokes land and the songs are fun. If you’re looking for some festive-themed drag to get yourself in the Christmas spirit, pick up a ticket before this show jets back across the pond.