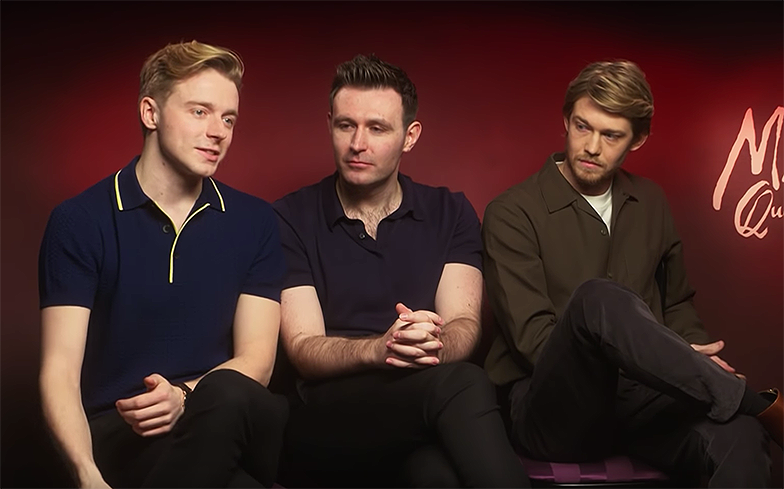 Ahead of the release of Mary Queen of Scots, we spoke with some of the film’s cast about their roles in the film.

The historical drama – which stars Academy Award nominated actresses Saoirse Ronan and Margot Robbie – explores the relationship between Queen Elizabeth I and her cousin, Mary Stuart, and the latter’s reign over Scotland in 1569.

Since its release in the United States last November, the two leads have received universal acclaim for their performances, and the film has earned nominations at the Critics’ Choice Movie Awards, Satellite Awards and the Screen Actors Guild Awards.

Before its UK release on the 18 January, we caught up with the film’s male cast, Jack Lowden, Joe Alwyn and James MacArdle, to discuss the gay storyline between Lowden’s character, Lord Darnley and David Rizzio (Ismael Cruz Córdova).

“I didn’t prepare at all, I don’t know what preparation you can do,” Lowden tells us of his character. “What I loved about him was that he seemed to, like most people in the story, it’s a story for me about people using one another, and what I loved was that he used his sexuality to become king consort of Scotland.

“There’s a scene where he does something that was uncommon of the times, that she didn’t expect, and then of course the very next morning he wakes up in bed with a man. I just loved that. It added to the complexity of him and his desire for everything. He just wanted to consume everything.”

We also discussed the importance of powerful female protagonists in historical dramas with Martin Compston and Adrian Lester.

Lester tells us: “With the MeToo stuff and the switch we’re having and the rebalancing, we should always when we’re creating art, film, theatre, music, we should remind ourselves that there’s a balancing act to take care of.

“And if we get swung too far in one direction, we should always rebalance it. So actually, this is unusual maybe because it has happened for a while or it isn’t the norm. It should be, because half the planet is female. It shouldn’t actually be a thing.”

Mary Queen of Scots is due for release in UK cinemas on 18 January. Watch the trailer below.