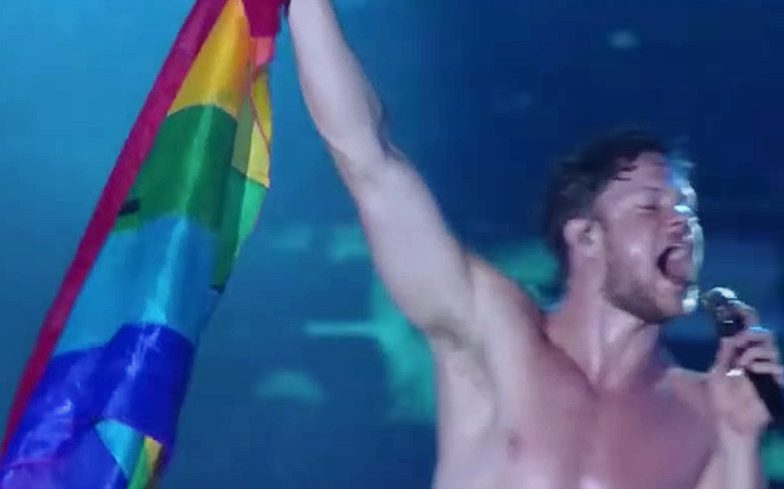 Imagine Dragons frontman Dan Reynolds showed his support for the LGBTQ community this weekend, when he waved the Pride flag at the Lollapalooza Brazil Festival.

Reynolds – who was brought up in a Mormon upbringing – has become a huge LGBTQ advocate in recent years, and in the past, he expressed regret in instances where he preached anti-gay messages.

He told Billboard: “One of the reasons I’ve felt such a need to speak out on this is I’ve gotten countless emails and letters from fans around the world who said, “I’m gay, but I know you’re Mormon so that probably means you don’t accept my lifestyle, but I love ‘It’s Time’ and your music.”

“That was devastating and it broke my heart to get letters like that. I’ve written back to these people to tell them, “No, I do support you and I’m here for you.””

In 2017, Reynolds received The Trevor Project’s 2017 Hero Award. After accepting his award, he said: “To be gay is beautiful and right and perfect—to tell someone they need to change their inner-most being is setting up someone for an unhealthy life and unhealthy foundation.

“I know a lot of Mormon youth who are gay and hide it because they feel as though God hates them or God is judging them. In Utah, the number one reason for death among teenagers is suicide.”

Reynolds’ upcoming film – titled Believer – follows the singer’s journey to becoming an advocate for LGBTQ Mormons, in a bid to end the “shaming” of gay, lesbian, bisexual and transgender youth that takes place in the religion.

He teamed up with director Don Argott to put “a face to the faceless and a voice to the voiceless.”

Believer received a standing ovation at the Sundance Film Festival in January, and is scheduled to be broadcast on HBO later this year.

Watch an exclusive clip from the documentary below.