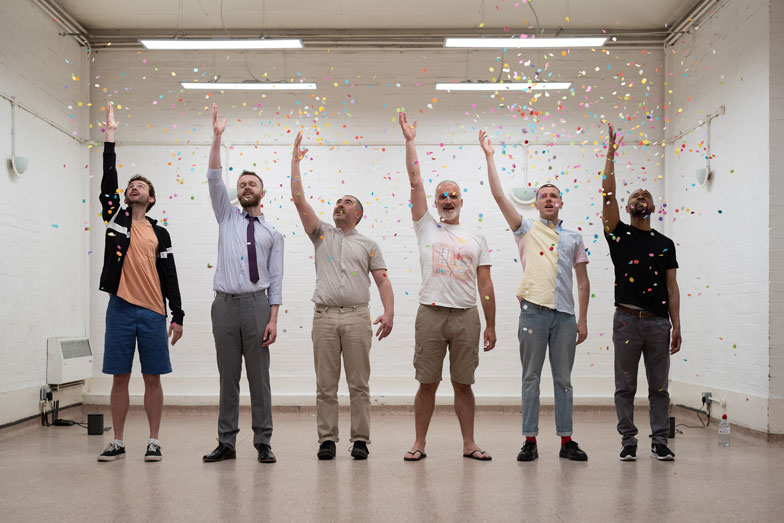 Commissioned by Studio Voltaire and Focal Point Gallery, Edward Thomasson’s new one-act play is being performed in Clapham and Southend-on-Sea.

I Woke Up This Morning is quite unlike anything we’ve seen in a while. At just shy of half an hour it feels more like a sketch, or the opening scene of a show, as opposed to a fully blown play. It tells the tale of six guys from a fictional gay men’s choir and plays out on an entirely empty stage, save for a speaker emitting the group’s backing track.

It’s a charming, brief snapshot into everyday gay life. As various sections of the choir rehearse in the background, the men take turns to strike up conversations and share their experiences. These range from relationship histories to marriage equality, and how dating apps and chemsex parties are changing the way that men relate to each other. It’s interesting – and fairly unusual – to see and hear these conversations unfolding in the very unremarkable and ordinary environment of a choir rehearsal.

The play is performed by six actors, some trained, some not, all recruited through an open casting. As such, don’t expect too much in the way of polish – this isn’t a slick or technically impressive production. There’s no lighting or staging to speak of, and the text is very simply performed with minimal movement. It does have a quirky, lo-fi charm, however – and the amateur nature of the production made it feel more authentically like we were observing an amateur choir rehearsing.

I Woke Up This Morning is a unique and quirky little show. There aren’t any technical fireworks to speak of – it is just six guys in a room – but that doesn’t mean it’s not entertaining; indeed it’s a perfectly enjoyable way to spend half an hour. It does feel more like the promising beginning of a play as opposed to the finished package, but we still liked gaining an insight into the lives of these men, even if it was all to brief.