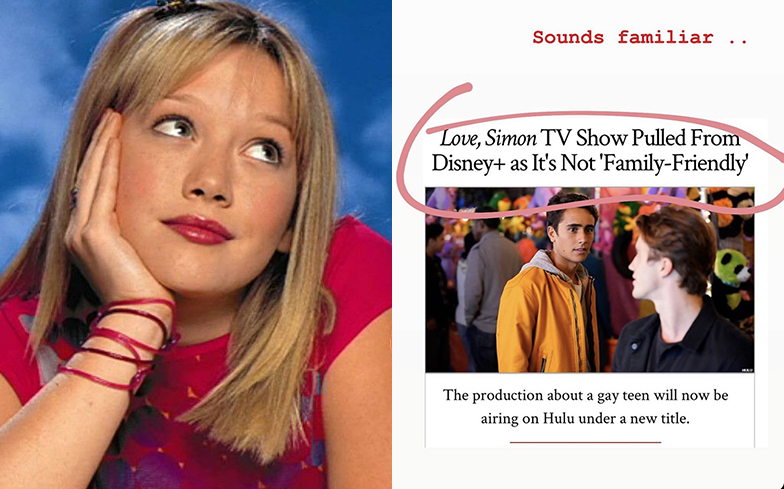 We can’t take the disappointment.

Hilary Duff has hinted that the highly-anticipated revival of her classic 2000s series Lizzie McGuire has been pulled from streaming service Disney Plus.

In an Instagram story shared to her 14.6 million followers, the singer-actress-icon (who famously ended homophobia with this advert) posted an article about Love, Simon’s spin-off series being pulled from Disney Plus as it’s not ‘family-friendly’ enough.

Along with the screenshot, she simply wrote: “Sounds familiar…”

Fans have largely taken this to mean that the Lizzie McGuire reboot has met the same fate as Love, Simon’s spin-off TV series – a major disappointment given the immensely positive response the announcement got from fans last year.

The revival would have seen Lizzie navigating her life as a 30-year-old apprentice decorator in New York City. “Lizzie has also grown up, she’s older, she’s wiser, she has a much bigger shoe budget,” Hilary revealed at the D23 Expo last year.

This isn’t the first bad sign we’ve had for the new Lizzie McGuire reboot, though, as it was recently announced that creator Terri Minsky decided to quit the show just two episodes in due to creative differences.

“Fans have a sentimental attachment to Lizzie McGuire and high expectations for a new series,” Disney said in a statement at the time.

“After filming two episodes, we concluded that we need to move in a different creative direction and are putting a new lens on the series.”

If it really has been pulled from Disney Plus, we’re keeping our fingers crossed it finds a new home.