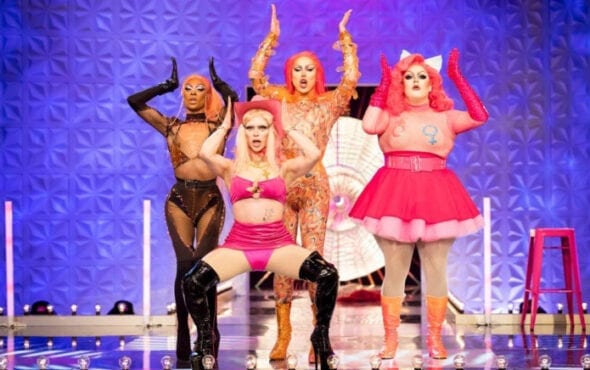 With the help of chart-topper MNEK, both teams recorded their own vocals for the infectious Leland and Freddy Scott-penned pop anthem UK Hun?, before making their RuRuvision debut on the main stage.

Banana Drama’s performance received mixed reviews, leading to the now-infamous “I don’t wanna see any fucking H&M” critique from Ru, while the United Kingdolls earned widespread acclaim from the judges.

Fans even hailed the United Kingdolls’ performance as the best musical number in herstory, beating out the likes of Alaska, Detox, Katya and Roxxxy Andrews’ legendary performance to RuPaul’s bitch track Read U Wrote U on All Stars 2.

Following the episode, their version skyrocketed to number one on UK iTunes, triumphing over new entries from stars such as P!nk, Dua Lipa and Taylor Swift.

It has now been confirmed that UK Hun? has made its debut on the UK Singles Chart at number 27, a higher position than RuPaul’s signature hit Supermodel (39) and the Frock Destroyers’ viral season one bop Break Up Bye Bye (35).

Similarly to the Frock Destroyers, fans have been campaigning for the United Kingdolls to represent the UK at the upcoming Eurovision Song Contest.

Even Lorraine Kelly, the Beyonce of daytime telly (as Tayce puts it), agrees.

After Lawrence referenced the infectious “bing bang bong” lyrics on social media, Lorraine replied: “I hear you – and I cannot get your song out of my head! It HAS to be our Eurovision entry this year or what’s the point!”

Rob Copsey, Editor at the Official Charts Company, also said in an article: “The campaign for this to be the UK’s actual Eurovision entry starts now…”

I hear you – and I cannot get your song out of my head! It HAS to be our Eurovision entry this year or what’s the point !!! @ShadyLawrence #RuPaulsDragRaceUK https://t.co/0d00kZKUpl

'UK Hun?' except it's an actual Eurovision entry pic.twitter.com/v2uSsBz1PP

Only by submitting UK HUN (the greatest Eurovision song never written) to Eurovision '21 will we finally be able to decide if Europe hates us or if our songs have just been crap the entire time.

Can we please submit UK Hun by the United Kingdolls as our 2021 Eurovision entry please? pic.twitter.com/MWok8lWr7t

United Kingdolls version of UK Hun? is genuinely the best chance the UK will ever have of winning Eurovision. Get them on it NOW #DragRaceUK

It makes me genuinely glum that we have acts like United Kingdolls right here and yet we're sending James Newman, AGAIN, as our Eurovision entry.

ok but imagine if UK Hun was the UK's actual Eurovision entry?

If the UK wanted to take Eurovision seriously we should have entered UK Hun. Like try give 0 points as you hum bing bang bong sing sang song https://t.co/5ocmCkFBX0