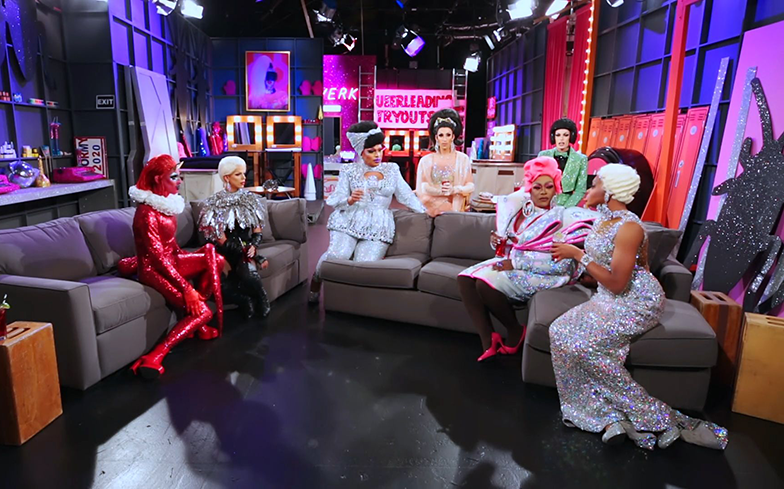 “We’ll keep you updated if that changes.”

Last week, the long-awaited 12th season of RuPaul’s Drag Race premiered on VH1 to widespread universal acclaim from fans and critics, and was lauded as one of the most sickening premieres (by us, too) in the show’s 10-year HERstory.

Taking inspiration from season six, the season 12 premiere introduced us to only half the talent: Brita Filter, Nicky Doll, Chrystal Meythd, Gigi Goode, Widow Von’Du, Heidi N Closet and Jackie Cox, with the remaining queens to debut next week.

For their first mini-challenge, the queens showcased a fall and spring lewk on the runway, and for the first maxi-challenge, they wrote and performed their own rap verse on RuPaul’s new Read U Wrote U-inspired bitch track, I’m That Bitch.

It was unlike any other premiere in the show’s herstory, and special guest star Nicki Minaj was, without-a-doubt, one of the best judges the show has ever seen, with many fans calling for her to be a permanent addition to the judging panel.

However, Drag Race fans were left disappointed when Untucked, the show’s Xtra Factor-esque spin-off, wasn’t made available on Netflix for viewers, even though that has been the case for the past two (?) years.

“I’m only getting half the story,” tweeted one fan while another wrote: “Not sure why Netflix would rob themselves of views like this. By the time the season is over all the gays will have watched untucked already.”

After seeing the outcry on social media, Netflix revealed on Twitter that Untucked won’t be available straightaway this year.

“It’s looking like Untucked will arrive all at once at the end of the season – sorry!” they wrote.

The representative continued to say that they’ll keep us “updated if that changes”. Yep, we’re disappointed too.

Next week’s episode of Drag Race will see the introduction of group two, which consists of queens such as Aiden Zhane, Dahlia Sin, Jaida Essence Hall, Jan, Rock M. Sakura and Sherry Pie.

Will they come into conflict with the first group of queens, or will we have to wait until episode three? Whatever the case, we can’t wait to see how this turns out…