Here’s how the US contestants reacted to Drag Race UK 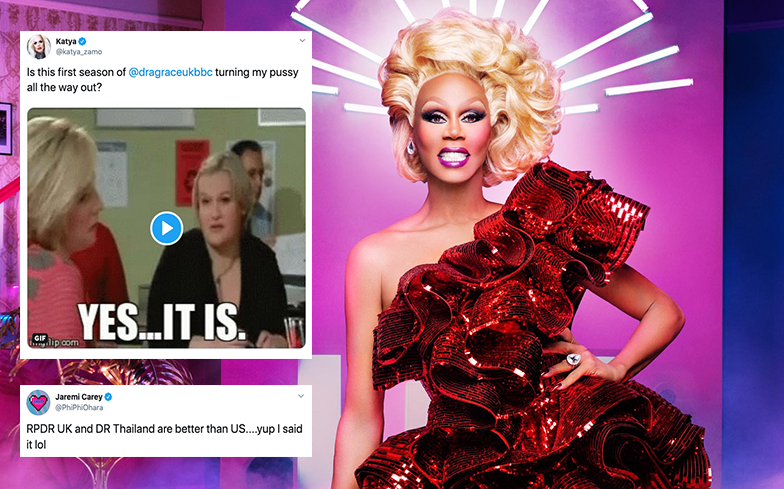 “RPDR UK and DR Thailand are better than US…. yup I said it lol.”

The American queens of RuPaul’s Drag Race are living for the British spin-off.

Last week, Drag Race UK aired to universal acclaim from fans and critics due to the contestants’ crass British sense of humour, the sickening Queen Elizabeth-inspired runways and the references to iconic English soaps and dramas.

It was the number one trending topic in the UK, so yas honey, it was a success. Past contestants from the US original seem to think so too because they were praising the show left, right and mothertucking centre on social media.

“BITCH…. @dragraceukbbc is the ticket! Mamma Ru looked insanely AMAZING!” said Trinity the Tuck. “The set is mind blowing! The girls are hilarious and they got the fashions! I’m a fan YASSS getting my gay life!”

Courtney Act said the show has “gotten back to its roots” while Shuga Cain joked that it took her “15” minutes to understand the queens. “But I LOVED it! Great job kids!” she wrote.

Monét X Change agreed, tweeting “they queens are funny, what are they saying?” and then praised Sum Ting Wong and Blu Hydrangea’s hilarious reenactments of Queen Elizabeth’s lewks and The Vivienne’s clip-on veneers.

Phi Phi O’Hara made the following bold statement: “RPDR UK and DR Thailand are better than US….yup I said it lol.”

Check out all the reactions below.

Next week, the queens’ acting skills are put to the test as they star in the new comedy costume drama – Downton Draggy.