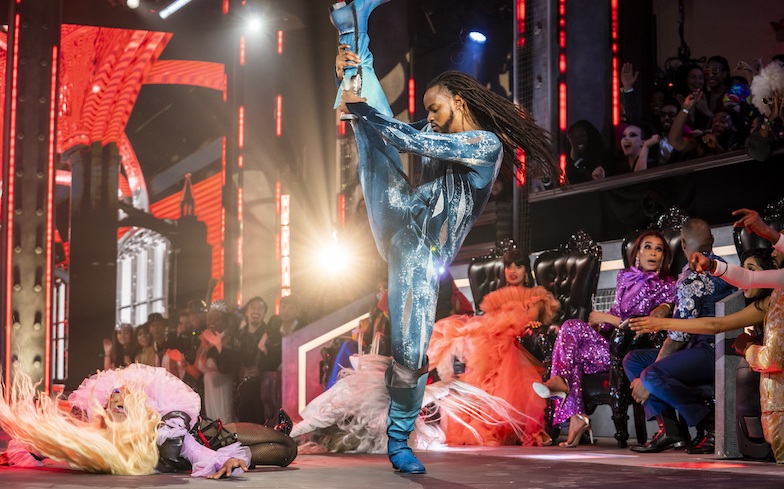 It’s about to get FIERCE up in here.

This summer, HBO are taking it to the Ballroom with their fierce new reality competition series Legendary, which features eight voguing houses as they compete in a series of “unbelievable” battles and showcase high fashion lewks on the runway in order to achieve “legendary status”.

The groundbreaking new show highlights the incredible talent of the LGBTQ+ community in Ballroom, while also inviting viewers into the world of the countercultural phenomenon to better understand its history and cultural impact.

With an incredible line-up of judges including Law Roach, Jameela Jamil, Leiomy Maldonado and Megan Thee Stallion, as well as MC duties from Dashaun Wesley and beats from DJ MikeQ, Legendary is sure to be the queer breakout hit of 2020.

“We belong in mainstream media. We have always held a place in making the moments we see in mainstream today, but there’s nothing like seeing someone in the media who looks and acts just like you,” Dashaun tells GAY TIMES.

“Queerness belongs, and our community is long overdue for this platform.” MikeQ says: “Ballroom is all inclusive and does not discriminate. For those who are new to it, want to enjoy it, and maybe even want to be part of it, it’s all possible.”

To celebrate the release of the sickening series, we spoke with the Ballroom powerhouses about the life experiences they’re bringing to Legendary, why Jameela Jamil is a “benefit” to the show and the importance of LGBTQ+ allies – and “spectators” – like Megan Thee Stallion.

What life experiences are you both bringing to the show?

MikeQ: I am bringing my life experience as a Ballroom DJ and producer. I have been doing this nonstop for 16 years now, and I only have this life-changing career path because I came to be a part of Ballroom via personal life experiences, like most others. I found my talents through the process of being able to be myself, not by playing any roles other than what I’ve already been doing, which is amazing. I appreciate being in that position on the show.

Dashaun: We’re bringing the reality of what occurs in today’s world of Ballroom – carrying our authentic selves into a world where people already have prejudgment of who you are before meeting you. My talent shouldn’t be shadowed due to someone’s beliefs. I shouldn’t have to hide who I am, nor should I be afraid of who I’ve become. It’s a groundbreaking moment to have this experience displayed on this show.

Do you think a show like this is proof that queerness is becoming mainstream?

MikeQ: I think this show is proof that queerness is already mainstream, although the likes of it has been under people’s noses forever.

Dashaun: We belong in mainstream media. We have always held a place in making the moments we see in mainstream today, but there’s nothing like seeing someone in the media who looks and acts just like you. Queerness belongs, and our community is long overdue for this platform.

We have RuPaul’s Drag Race which is amazing, but do you think Legendary will show people a different side to the queer scene?

MikeQ: RuPaul’s show and Legendary are only similar in the terms of queerness and competition. Culturally, they are two completely different aspects of queer culture. Ballroom goes deep and has much to show you outside of anything you’ve ever seen.

Dashaun: Legendary will give viewers the opportunity to see a lot of the Ballroom scene’s origins and how it’s played a part in our world. We have catchy original lingo that has influenced many television shows and performances in the industry. Our creative freedom in the fashion categories we display on the runway while competing has inspired many designers and visual creators. Legendary will show how we like to take a leap of faith and be the best when hitting the floor.

MikeQ: I enjoyed her presence on the show. Many people think I questioned her being part of this not knowing how it would be, but she’s amazing; she does so well at judging and being here with us. She’s a cool and calm presence that I fully enjoy, and her being there brings so much of a new audience to the scene.

Dashaun: There’s nothing in the world more refreshing than having a celebrity ally like Megan Thee Stallion embrace, love, and support our community. Her platform as a celebrity puts the community in a place of existing. She could be doing something totally different at this very moment, but it speaks volumes to know that she decided to support us. We, as a community, have always welcomed those who enjoyed our place of home. We call them ‘spectators’. They don’t participate or compete in Ballroom, but they come to watch, spectate the balls and enjoy the show.

There was some backlash from a minority of people who thought Jameela Jamil shouldn’t be involved with the show, and she was forced to come out as queer as a result of that – what are your thoughts on the situation?

MikeQ: Some people just didn’t understand why and how Jameela could be on this show as opposed to someone from Ballroom with that expertise, but in fact she is certainly a benefit to the show. People are entitled to their opinions yes, but give it a chance and trust that all those opinions will change after episode one. She’s a darling and kept me laughing on set more than anybody. Love her.

Dashaun: It’s one thing for a celebrity to come into our community unannounced and want to profit from us, with no acknowledgement or referral back to where they conjured up the idea to want to include our talent into their work – an issue we have been experiencing for many years. But then, when you have the opportunity to invite celebrities into the room with you, and they are open and willing to share their platform while helping to open the eyes of other communities that have been underground for years with little to no support, it is major. Jameela, along with Law Roach and Megan Thee Stallion, have more to offer this community than what others may know. They are all shedding light on their fans and troops about the greatness of our community.  It’s one thing to show people who we are, but when you have public figures showing others who we are, it fixes the narrative. The Ballroom scene has always invited and given red carpet treatment to public figures who enjoy the culture.  It’s my job, on top of others in my community, to make sure this is handled correctly, and little do they know, we are.  We’ve had tons of public figures judge and participate in Ballroom before social media had said so. Being that this show has people in production that are a part of Ballroom, by inviting these celebrities and guests to bring forth a world that’s been shadowed for years… We thank them just as we thank Jameela for her contributions. Plus, she’s been to a few Balls before Legendary was thought about!

How do you strike a balance between being open and welcoming for anyone who wants to experience and respect the Ballroom scene, while also staying true to its queer roots?

MikeQ: Ballroom is all inclusive and does not discriminate. For those who are new to it, want to enjoy it, and maybe even want to be part of it, it’s all possible. The ways needed for one to respect this is to have knowledge, and I say that a lot. You need to know the history, who, what, when, where, why and how. That is the key to so much beyond just the Voguing you see and are interested in, or the music you hear. Just going out and doing things on your own as far as a culture is concerned, is never the way. I think it’s our duty to speak up when things aren’t done right and correct folks when they need correcting, as this is a learning process.

Dashaun: You find this balance when you meet the person who wants to be involved. The scene is quite open to those willing to understand and surround themselves with the people who are apart. In other words, Ballroom can be for anyone. We have selected categories for those who may find interest in participating and joining scenes that you can compete in.  If you know you are capable of winning or making a moment within the category and contribute to the creating history for yourself and others, we welcome you to. We support everything around lifting each other up and trying to keep the true value that Ballroom upheld.

Was there a particularly gag-worthy moment from the competition that stands out for you?

MikeQ: Yes! But you will all have to wait and experience that moment like I did. There are a few…

Dashaun: I will put it like this… Ballroom participants express themselves without a doubt. There is a moment within the competition where the contestants and judges swap words, baby, it is one for the books. You will really get that moment to gag just as I did on stage when it occurred. Those moments bring the exact reality of Ballroom to television. Oh just wait and see!

Can we expect a season two?

Dashaun: I expect nothing less!

MikeQ: Can we put that in the universe together right now?! I surely hope for it, and know it will happen.

Dashaun: A season two would rock your world. The question is, are you ready for a season two?!

Legendary launched 27 May on HBO Max – you can watch the first episode for free on YouTube here or below.