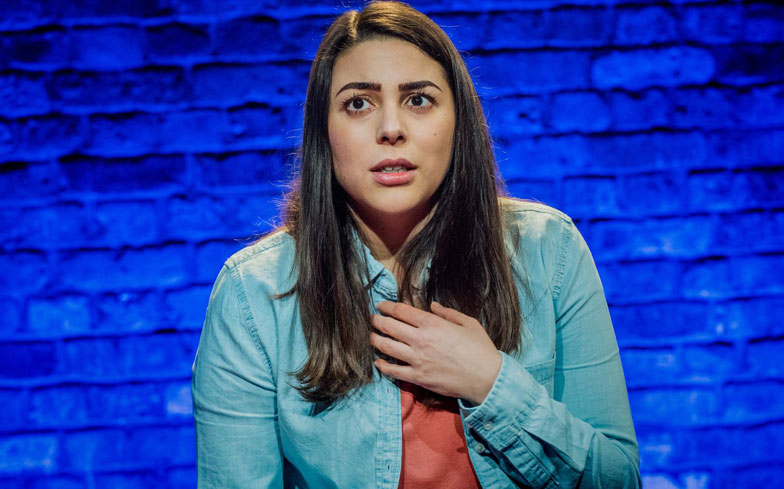 Hanna tells the tale of a young mother who, following a mix up at the hospital, spends three years raising a child, Ellie, who isn’t her own. Following a DNA test, she makes the decision to meet her birth daughter and the couple who have been raising her – a decision that changes all of their lives.

It’s an absolute powerhouse performance from Sophie Khan Levy. Perfectly at ease on stage, she delivers each word with a real authenticity, holding the audience’s attention for the 70-minute duration. It’s an incredibly immersive show; her believability meant that we were able to picture each scene and moment described, without the requirement for any elaborate sets or lighting trickery.

Indeed everything here is incredibly minimalist, which makes a refreshing change. The play feels a bit like a chat show confessional – Hanna is sat on a chair next to a table with some water, telling her heartfelt story in an informal, conversational style directly to the audience. It’s an excellent demonstration of just how powerful words can be.

Being a one-woman show does impose some limitations. For example, we would have liked to have heard some of the opinions of Hanna’s partner or the other mother – everything is told entirely from Hanna’s perspective. The format does also require there to be a huge amount of detail in the text – and while it’s mostly necessary, we did feel a few moments were a little superfluous.

Overall though, we thoroughly enjoyed Hanna – it’s quite unlike anything we’ve seen for a while and explores some interesting issues. It’s intense, but for all the right reasons, and entirely gripping throughout – a captivating one-woman show.