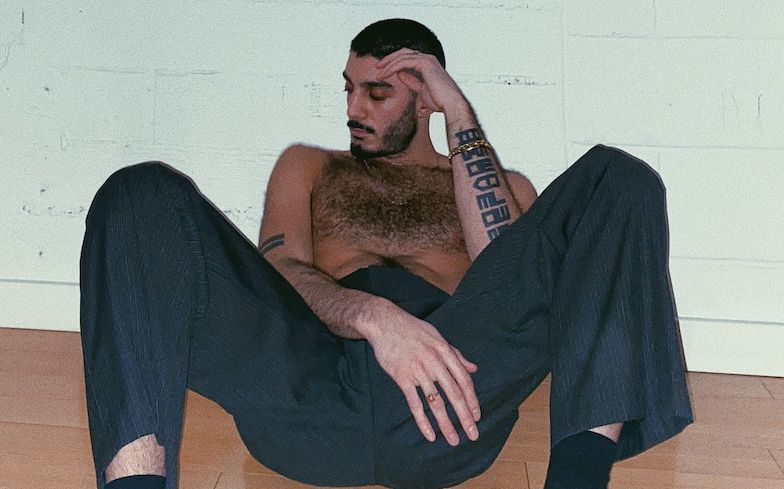 GESS has just dropped the queer quarantine EP of the year.

While artists such as Lady Gaga and Sam Smith have opted to delay their music due to the coronavirus pandemic, the writer, producer and singer has used his time in self-isolation to take his brand of dark R&B to a whole new level.

“I wanted to try and touch on ideas that weren’t so on the nose,” he tells us. “I didn’t want to write a song called ‘Lockdown’ or something that’s so predictable. I wanted to touch upon ideas that everyone was experiencing in a more creative way.”

To commemorate the release of Psyche, we caught up with GESS to discuss his creative process in self-isolation, how his creative partnership with Shea Coulee came to fruition and how emerging queer artists in London differ from those in LA.

Hello GESS! How are you?
I’m good! I’m drinking my coffee and I’m about to smoke a little joint…

You’re quarantined on your own aren’t you?
Yeah. To be honest, I’m such a loner already. I’ve always been a freelance music producer, like since I graduated high school, so I’m used to spending long hours by myself, at a computer working. I use this opportunity to reconnect with my playful music side that I would do when I was younger, when I would just play around with music and entertain myself. There are times when I’m like, ‘This fucking sucks,’ but then it’s not that different for me.

I love being inside and cancelling plans, so I’m okay… for now.
Right? Totally. It would be nice if I could see my friends or this guy that I met right before this started… Besides that, I have all this time to be creative. I just drink coffee all day and do whatever I want.

You’re a bit of a night owl aren’t you?
Oh yeah, definitely. You could see that when you were messaging me, ‘Isn’t it 4am there?’

So, I love love love Psyche. How long did it take to create this EP?
What was really helpful was that I used beats from other producers this time, so that definitely helped with the process, but I wrote about 12 demos in two weeks. I truly felt like a crazy artist out of a movie, living in my chaos. I felt like the Mad Hatter or something, I don’t know, just very mad energy. So yeah, 12 demos… not full songs, but each song had a hook and a verse melody. I just landed on these three because I connected with these the most, they felt the closest to the box out of the bunch.

All three songs are very relatable, I have to say.
Yay! I wanted to try and touch on ideas that weren’t so on the nose. I didn’t want to write a song called ‘Lockdown’ or something that’s so predictable. I wanted to touch upon ideas that everyone was experiencing in a more creative way.

I have a feeling fans will connect with Digital Isolation… it’s a bit of a steamy isolation bop isn’t it?
[Laughs] I have a couple quarantine baes that I was obsessed with, and they’re from different parts of the world so I just wanted to write something. I also noticed that a lot of people within the queer community were starting an OnlyFans and talking about sexting or FaceTime dates, stuff like that. I was like, ‘Oh my god, what if I write a song about how you’re so looking forward to basically having sex with someone once this is over, but in the meantime let’s just video chat?’

It’s very topical…
It’s definitely more playful than what my music usually is, so I wanted to try that and see how it’ll be received, and explore different parts of my writing style.

Have any of your “quarantine baes” heard the song?
No they have not! And they won’t know it’s about them either – or maybe they will.

“Why would you think it’s about you?”
Right? Exactly.

What difficulties did you face when making this EP?
There definitely was a couple of moments where I was like, ‘What the fuck have I gotten myself into? Everyone’s going to realise I suck!’ There was a lot of self-doubt, because I was working so quickly. Towards the end of the two weeks, there was one day where I was completely burnt out and I literally had to take a step away from any creativity and give my brain a second to reset. I was trying so hard to tap into these emotions that weren’t necessarily there, because I had just been quarantined, so I wasn’t experiencing much to write about. I just took a day to lay on the couch and watch Real Housewives of Atlanta and then I snapped back the next day, and that’s when I wrote Faded. The burnout was the biggest difficulty.

Other than creating music, how are you keeping yourself occupied during this time?
I’m a Virgo, so I love to clean my apartment, that’s definitely been a thing. I have spent some time going hard on these floors and scrubbing every little corner. I’ve been doing laundry… I’m a very project-oriented person, even outside of music I like to have projects. I’ve done some photoshoots with the self-timer on my phone to create some Instagram content, so that’s been good. I just try to find these little projects to keep me busy.

I’ve noticed a lot of queer emerging artists collaborating on Instagram Lives – do you have plans for anything like this?
I haven’t done any Instagram Lives, but me, SXMSON and Andrea Di Giovanni have been talking about doing some virtual collaborations. I love that London crew that I’ve slowly become friends with over the past year. I’m actually thinking of releasing a deluxe version of this EP and adding two songs to it, and having one of them feature Andrea, so that’s definitely in the works. Shea Coulee also wants to do a feature on Digital Romance, and we’re going to release an alt-version of the song with her on it. That’s going to be cool.

What is it like to have that bond between you all, as emerging queer artists?
It’s interesting because the people that I’ve met in London that are queer musicians, they have such a different energy from the queer artists in Los Angeles.

How so?
No shade to LA, but it’s a very competitive city. Everyone wants to be famous. I hate to say it, but some of the stereotypes are true. Sorry! They just are. I’ve definitely met some amazing people in LA. Not everyone is competitive or exclusive by any means, but I’ve noticed that people in London are way more inclusive – at least the people that I’ve met. They’re less locked off, I guess that would be the best way to say it? Sometimes people in LA can hold onto their connections and their resources, they don’t want to share as much. Honestly, its my least favourite thing about LA, when people think they’re too cool. I’m sure there are people like that in every city, let’s be honest, but energetically I’ve noticed that from the people.

You mentioned Shea – how did your relationship come to fruition?
I love working with Shea. It was when I first moved to LA, so I was really trying to find my place and I was really unsure of myself. It was a very big period of growth and experimentation. I was producing a track for Big Dipper and he texted me one day saying, ‘I’m going to get Shea Coulee on the track.’ Of course, I freaked the fuck out because this was my first time ever working with a Ru girl, or having someone who’s an actual celebrity on any of my tracks. Long story short, we meet up and she records her part. We were in the car on the way back from the session, and we were talking about Lady Gaga and how people hand her songs and beats. I was like, ‘Girl, I will literally write you a song and hand it to you. It will be yours.’ She turned around from the front seat and was like, ‘Oh my god, take my number.’ Maybe three or four days later I sent her Gasoline.

Quick turnaround!
I know! Again, it’s just me being that crazy obsessive artist. When I get fixated on a project, it’s all that I do. So Gasoline happened, and then I sent her Rewind a little while later. It turned into this recurring thing. Shea is amazing. I just stayed with her and Dan, her boyfriend, and they are so down to earth.

Can we expect more collaborations, except for the Digital Romance remix?
We do! She just posted a snippet from her next project on Twitter. I don’t want to say too much! When I give her a song, I just let her do everything because I don’t want to step on her toes. At the end of the day, it’s her song so I try to be very soft-handed.

How has the coronavirus affected your plans for the rest of the year?
To be honest, I don’t really know yet, because we’re still kind of just seeing how it all pans out. Los Angeles just extended lockdown until May 15, so now we have another whole 30 days. I had another three-song EP that was supposed to be the project that comes out next, and that’s literally just sat there on my computer. Because I didn’t want it to be rushed, I thought I’d just make something new to go in the gap. Hopefully, I can just release that as planned. I do have a feeling that once I run out of making music videos and photoshoots, that’s when I’m really going to start going crazy. There’s only so many photos I can take in this place.

What’s the first thing you’re going to do when quarantine is over?
Go to the beach! Or just like lay in the sun. LA summers are my favourite, it’s why I love living here. The summers are just so fun, there’s so much to do and the weather is so nice every single day. You can just feel an energy because it’s so nice out, everyone’s going to parties, wearing tank tops and going to the beach. You can’t beat it.

GESS’ new EP, Psyche, is now available on iTunes and streaming services. Listen here on Apple Music or below.