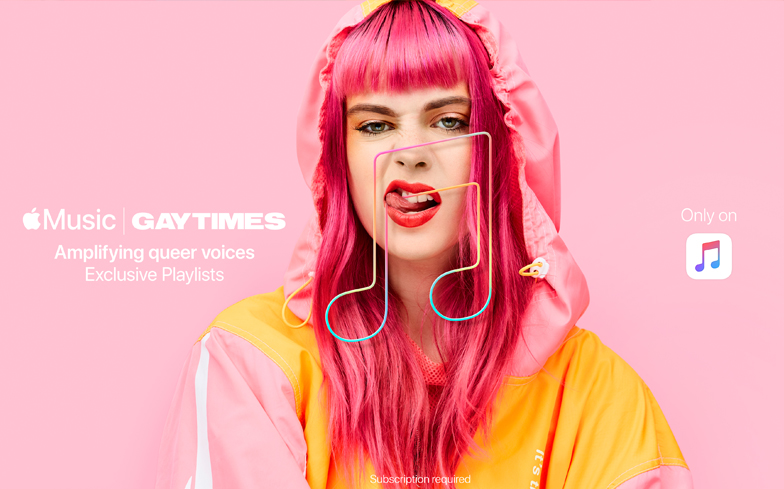 Through a series of GAY TIMES-curated playlists available exclusively on Apple Music, queer music acts from across the LGBTQ community will have a new platform for the great work they are already producing.

The project is being supported by a wider GAY TIMES and Apple Music media campaign, featuring next generation queer talent such as Kim Petras, GIRLI, Vincint and ALMA, and can be seen on digital billboards across London and Manchester throughout both cities’ Pride celebrations this summer.

Kim Petras and GIRLI are just two of the names that will feature in the wider campaign, with their recent GAY TIMES editorial cover shoots taking centre stage, and even more queer talent will be unveiled in the coming months.

While launching during the Pride season, this marks the beginning of a long-term commitment by GAY TIMES and Apple Music to continue amplifying queer voices across their platforms. GAY TIMES launched their first four playlists on Apple Music earlier this year, leading with a new flagship playlist, ​Queer & Now​, which is updated every week.

Focussing on the best new tracks by LGBTQ artists – both established and emerging – it has grown into an extensive collection, highlighting the queer explosion that is currently taking place in music. The artists featured come from different experiences, backgrounds and genres, making the Queer & Now playlist a diverse and eclectic celebration of LGBTQ brilliance.

From breakthrough stars such as Lil Nas X, Kevin Abstract, and L Devine, to emerging talent like Carlie Hanson, Aaron Porter, and Dorian Electra, the Queer & Now playlist is a powerful discovery tool on Apple Music for listeners who want to hear the very best new music from LGBTQ musicians.

“There’s a surge of exciting queer artists releasing the best new music out there right now. Curating the Queer & Now playlist has allowed us to share that brilliance with more people, providing a space for LGBTQ music acts to be heard and celebrated. With the support of a mainstream platform like Apple Music, it means we can help showcase this extraordinary queer talent to over 60 million subscribers worldwide,” said Lewis Corner, Chief Content Officer at GAY TIMES.

“The LGBTQ community has had a long relationship with music, using it both as a protest and a party. Many of the icons within our community are pop stars, and with Queer & Now we aim to unearth the role models of the future that will lead the way to greater LGBTQ representation and acceptance.”

Alongside Queer & Now, GAY TIMES has curated a number of other playlists that shows the LGBTQ community and their allies at the centre of the music industry. Queeroes is where you will find classic songs by LGBTQ artists old and new, celebrating queer icons who have paved the way for this new school of music talent.

​The Allied Pop Forces acknowledges some of the community’s most vocal advocates in music, and the ​Summer of Pride playlist rounds up all of the incredible talent performing at Pride events across the globe this year.