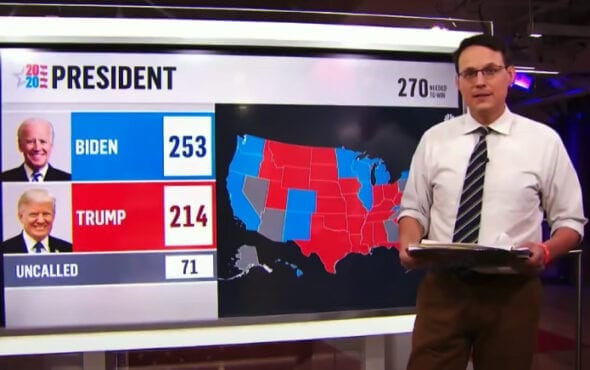 Openly gay MSNBC correspondent Steve Kornacki will be developing his very own game show as part of new deal.

According to a report from Deadline, Kornacki has signed a new multimillion-dollar four-year contract with NBCUniversal.

As part of his deal, the political analyst will host his own game show. The series will highlight Kornacki’s interests in sports, politics, and statistics. Further details surrounding the show is still unknown.

The game show is just one of the projects that the correspondent will be heading in the coming months.

It was also revealed that Kornacki will be joining the coverage team for both the 2021 Tokyo Olympics and the 2022 Beijing Winter Olympics.

Alongside his new series and Olympics coverage role, the 41-year-old journalist is now a regular analyst for NBC’s Football Night in America and will participate in the 2022 Super Bowl coverage.

Cesar Conde, the chairman of NBCUniversal News group, praised Kornacki in a statement to Deadline.

“Steve brings so much passion and genuine enthusiasm to his work, on top of his encyclopedic knowledge base, that it’s just impossible as a viewer not share his interests and excitement,” Conde explained.

The political analyst became a social media sensation during his coverage of the 2020 presidential election. His battered tie became a meme and has been inducted into the Smithsonian.

We can’t wait to see more of Kornacki in the future.