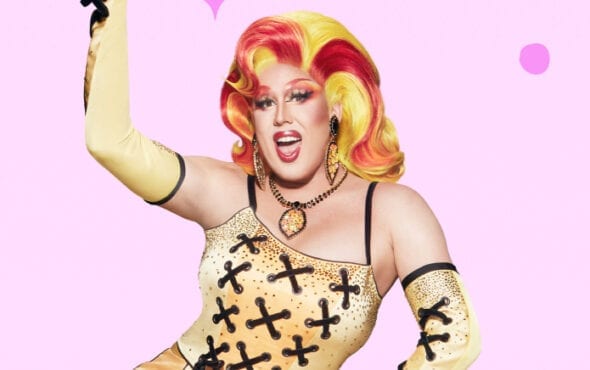 “You have to respect that there’s a bigger picture and a bigger plan.”

As one of the most revered entertainers in New York City, all eyes were on Tina Burner to slay this season of RuPaul’s Drag Race and take the crown, as well as the cash prize, for her hometown.

While she gained a solid fanbase due to her quick wit, dry sense of humour and signature red, orange and yellow aesthetic, Tina left sooner than anticipated following a sickening lip-sync smackdown against Utica to My Humps.

Due to their beast-inspired runways, the queens delivered polar opposite performances to the classic rap anthem; Utica opted for a spookier route while Tina twerked and busted several hilarious moves across the stage.

Ru’s decision to send Tina home was met with shock from social media, with many users declaring that her and Utica’s showdown should’ve been the rare “double shantay” of season 13.

Speaking with GAY TIMES, Tina said of her departure: “I wanted to be very Teresa [Giudice] from Housewives and flip a table. But all kidding aside, it’s a competition and people have to go. At that time, you have to respect the judge’s decision.

“You have to respect that there’s a bigger picture and a bigger plan.”

Although Tina never won a maxi-challenge, she earned rave reviews for her three-way lip-sync to Lady Marmalade, her Snatch Game impersonation of Richard Simmons and performance in the disco-themed dance documentary.

Looking back, however, the star admits that her proudest moment is “being able to shoot [Drag Race] during a pandemic” and create some gag-worthy television.

“Drag queens are always on the forefront of everything, whether it be politics, entertainment, or any movement,” she begins to explain.

“During such a time as a pandemic, it is more important than ever to be able to create laughter and to create some sort of normalcy and entertainment.

“At the end of the day, we’re going through one of the hardest times we’ve ever been through, but I think us being able to do the show gave people a lot of hope that normalcy will come back and there’s a light at the end of the tunnel.”

Tina adds: “I’m also proud of the friendships I made, and I’m proud of being able to look back at it and grow from that now. I’m proud of the whole journey, because it’s just a stepping stone of what’s to come.”

When we ask Tina if she’s down for a future season of All Stars, she excitedly responds: “1,000% because I’ve been there now, and I’ve seen the game. I’ve watched myself on TV and seen what didn’t work. Michelle was 1,000% correct.

“I’m a perfectionist and I love to be able to control things, but in that environment you can’t control things. I’ve learned to let loose a lot more. It’s time for Tina 4.0. I love the journey, but if you’re not going to evolve, what’s the point in doing this?”

When it’s safe to go back to normality, Tina says she’s most excited about “hugging people and just being able to perform in a space where we can all just be together.”

“The main reason I do drag is to make people laugh and have a good time and take them out of the day they’re having. It’s about the community,” she adds.

“I always say this at every show and I end with, “We are stronger as a community than we are as a nation.” There are so many different beliefs we all have, but in our community, what we do is all come together. It’s about being together.” The 13th season of RuPaul’s Drag Race airs every Friday on VH1 in the United States. The episode premieres the day after in the UK on Netflix.

On next week’s episode, the top five queens – Gottmik, Kandy Muse, Olivia Lux, Rose and Symone – will flex their acting chops in the brand new sci-fi adventure, Henny, I Shrunk The Drag Queens!