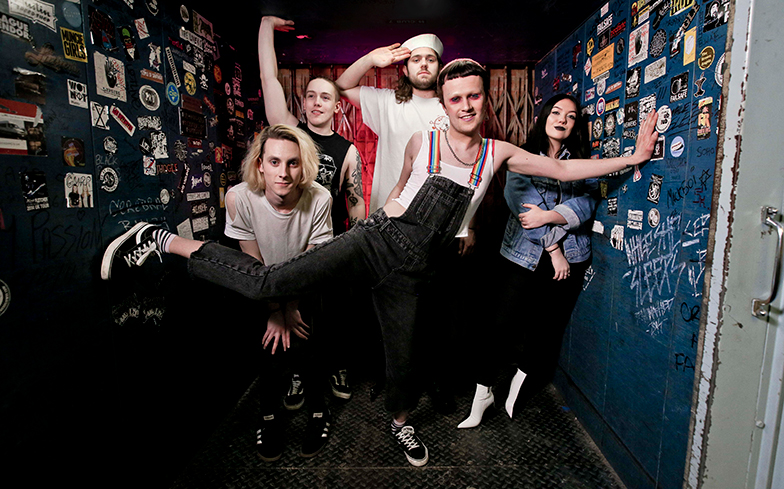 Queen Zee is here to shake up your Pride playlists.

To celebrate the release of the video, we spoke with Queen Zee to talk about the inspiration behind their art, the importance of musical diversity in queer scenes, and the future for the trans rights movement…

Where did the idea for Sass Or Die come from?
When me and [bandmate] Jay first starting writing, it was one of the first songs we worked on. We practised in his bedroom at his mum’s house and we were saying that it was great to actually be making music after so long of not finding the right people. He said, “I wanna do this for the rest of my life,” and that became the leading line. The song is about embracing yourself and taking a risk and just doing what you have to. I had to pursue my music, I had to pursue that persona to play with gender, I had to escape my little town. And we both did.

The stereotype is that LGBTQ people love pop music and only pop music, so what message would you like to give as a punk/rock artist?
Punk is pop! The Ramones are just The Beach Boys for gals who like it rough. But I can totally relate to that feeling. I was – and still am – a scruffy punk kid who felt like I didn’t fit in around gay bars that only played Madonna and sparkly pop. As I’ve grown up, I’ve begun to love and appreciate pop in a different way, but really discovering queercore bands like Limp Wrist and Tribe 8 was such a life line as an angsty teen. I loved punk but all the bands where these big aggro dudes that I couldn’t relate to at all, which was just as alienating as the pop world. I was somewhere in between. Queer people are just people, we have different music tastes. My next step is to pioneer queer country music…

Where do you get inspiration from as an artist?
Everywhere, all the time! But I’m very visually focused, so I grew up obsessed with 70s and 80s b-movies, and always loved the theatricality of them. Then, as I got older, I discovered Rocky Horror which obviously really connected. But I’m equally in love with glamour, especially performers like Amanda Lepore and drag artists like Cheddar Gorgeous. I’m a huge fan of the club kids drag scene.

There are more and more trans musicians getting recognition now – people like SOPHIE and Kim Petras. How important is it to have positive visibility for the community?
Yeah, it’s very important. [But] we want to normalise without having to assimilate, and by that I mean we want to expose people to transgender so it becomes considered normal and not abnormal. At the moment, being considered abnormal, you’re often seen as less than normal. ‘Less than normal’ then turns to ‘less important’, and when someone is less important than the rest of society they’re treated like it. So recognition is great, but what we want to avoid is assimilation where we’re forced to ‘tone down’ or conform to standards that aren’t our own. Sometimes this embodies as ‘passing’ (appearing cisgender) when what we really need is acceptance for all forms of transgender, regardless of how we present, act, live or who we’re rooting for on Love Island.

Of course there’s still a long way to go for equality. What more needs to be done?
We are in a good place in terms of moving forward, and the most positive thing is that I don’t think the mainstream has ever talked so openly about transgender and there is a lot of good happening. But this of course comes with a backlash, and I don’t think any trans person is surprised by that, but it doesn’t stop the horror of it. Seeing major UK newspapers demonising transgender charities that help children or vulnerable people feels incredibly twisted. What we really need is an increase in education, not just for trans people but cis people on trans issues. I often get GCSE-level biology badly quoted at me, which is just incorrect, but people don’t know better and we can’t expect them to if it’s never been explained to them. People aren’t born transphobic, it’s conditioned. We also need a step forward in terms of medical care, which is a struggle with the NHS cut to the bare bones. More sex education is needed, particularly in schools. And even basic things like people just looking out for trans friends, because the world can be tough when you can go a whole day without seeing anyone else that looks like you. But to all trans, gender fluid and non binary people out there, you’re rad as hell and Queen Zee love you endlessly.