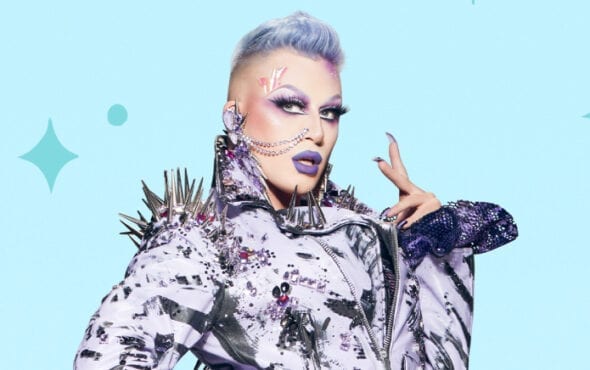 “Ru said I am just beginning to slay, so don’t get it twisted.”

Her name is Joey Jay and she didn’t come to play, she came to show the world that she’s a “gay ass bitch” – as well as a “filler queen” – and that she’s proud af.

Shortly after entering the werkroom, Joey won legions of Drag Race fans across the world with her lipstick lesbian-inspired aesthetic and hilarious self-aware confessionals, which have generated meme after meme.

Sadly, Joey’s time on season 13 came to an end last week after the judges questioned her taste level in the staple ball maxi-challenge.

To the beat of Iggy Azalea and Charli XCX’s rap-pop classic Fancy, the star used all of the tricks in her repertoire to remain in the competition, but it wasn’t enough to conquer over seasoned entertainer LaLa Ri.

Although Joey left the series much sooner than she – or fans – anticipated, she tells GAY TIMES of her Drag Race experience: “It feels incredible, and very validating especially because my style of drag is a little bit different. It’s amazing!”

While she’s disappointed to not make it further in the competition, as there were specific challenges she wanted to slay (ala Snatch Game), she felt “happy to be there and grateful for the opportunity”.

“A lot of girls say the race starts after the show, so I am looking forward to what the future holds!” she admits. “Ru said that I am just beginning to slay, so don’t get it twisted. It just reminds me of a Shangela moment!

“I feel like the audience really wanted to see a lot more, and when that’s what the audience wants – that is what they get. People ask me, ‘What is it like watching yourself on TV?’ and I just say, ‘When it is right, it’s right.’ I love watching my confessionals, and I think that’s what I’m going to miss the most.”

Due to her time on the series, Joey says she has “the bug” and is aiming to sashay back onto the small screen in the near future. “I am itching to go back on television so bad that I probably need antibiotics,” she jokes. “I definitely want to do more TV and tour. Production is my jam. Anything that I can get my hands on with LED screens and backup dancers: sign me up.”

On this week’s episode, the 11 remaining competitors will funk it up in a disco-dancing documentary, complete with 70s-inspired runways. Celebrity Drag Race alum Loni Love will once again join the judging panel.

You can watch the fierce trailer for the latest season of RuPaul’s Drag Race here or below.