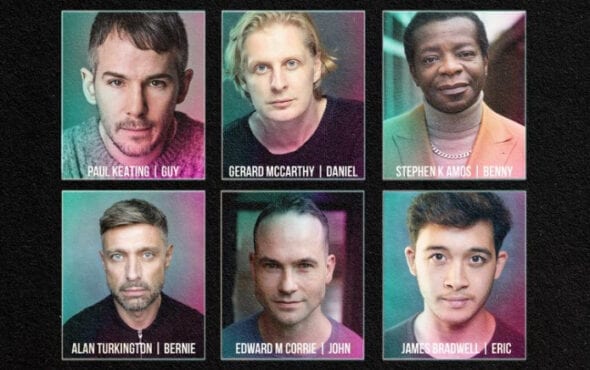 We’re super excited to see a production of Kevin Elyot’s classic 1994 gay play, which won both the Olivier Award and Evening Standard Award for Best Comedy when it first debuted, return to the London stage.

This revival, which opens at The Turbine Theatre this summer, will be directed by Matt Ryan. Comedian and TV star Stephen K Amos will appear in the show alongside Gerard McCarthy (The Fall). Paul Keating (Casualty), Edward M Corrie (Holby City, Eastenders), Alan Turkington (Doctors) and James Bradwell (Romeo and Juliet at Shakespeare’s Rose Theatre) will complete the cast.

Set in Guy’s London flat, old friends and new gather to party through the night. It’s the summer of 1985 and, for Guy and his circle, the world is about to change forever, due to the mounting AIDS crisis. My Night With Reg considers the fragility of friendship, happiness and life itself.

Paul Taylor-Mills, artistic director of The Turbine Theatre – who will also be producing Heathers and Be More Chill on the West End this summer – has said: “I’m beyond privileged that our first production to reopen The Turbine Theatre will be a revival of Kevin Elyot’s seminal play My Night With Reg. This witty and poignant portrait of a moment in time remains relevant 27 years after its premiere and is without doubt one of my favourite plays.

“The work remains one of the most important gay plays ever written and is an intricate exploration of both the beauty and complexities of gay life and relationships and their position in society. Upon re-reading the play a few months ago I was struck by both how far we’ve come, and yet, in some ways, how far we still have to go. I’m honoured to be presenting this play and hope that audiences are moved by it as much as I still am.

“We re-open our doors with a renewed sense of purpose, as resilient as ever and this time to stay. On a personal note, I’d like to thank our loyal audience for the support we’ve received over the last year. It has not gone un-noticed and we are truly grateful.”

We’ve been big fans of the LGBTQ+ programming at The Turbine Theatre since it opened a couple of years ago, which has included 2019’s Torch Song and 2020’s Cinderella: The Socially Distanced Ball. We’re sure that My Night With Reg will be another must-see for LGBTQ+ theatregoers in London and we can’t wait to check it out this summer.

My Night With Reg plays at The Turbine Theatre from 7 July to 21 August. More information can be found here.