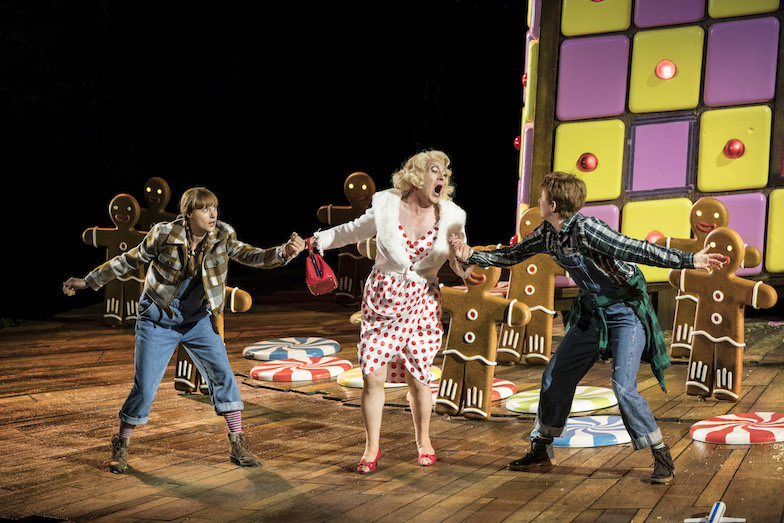 The English National Opera’s new production of the classic fairytale has opened at the Regent’s Park Open Air Theatre, directed by Timothy Sheader.

Following on from the success of last summer’s The Turn of the Screw, Regent’s Park Theatre has once again teamed up with the ENO, this time for a new production of Engelbert Humperdinck’s classic opera based on the children’s fairytale. The Open Air Theatre provides an enchanting backdrop for this charming new production – as the sun sets over the glade, it really feels like we’re being transported to the forest-at-night setting at the heart of the story.

The opera uses an intelligent and witty English language translation by David Pountney, and the songs are delivered with real clarity, aided by some sensitive amplification. As a result we didn’t miss the surtitles at the ENO’s usual home The Coliseum, although a copy of the libretto is provided if required. The quality of the musicianship is excellent throughout – the singers all turn in fine performances, most notably our central duo Hansel (Rachel Kelly) and Gretal (Susanna Hurrell) while the 20-piece orchestra, conducted by Ben Glassberg, provided the perfect accompaniment.

While it is, for the most part, a faithful retelling of the story, there are a couple of more modern touches which entertain. One amusing moment sees our protagonists’ mother hoping a scratch card will save the family from their financial woes. Later on, a dream sequence occurs on board an aeroplane, complete with a neatly-choreographed number from the flight attendants.

It all looks very cute – the picture-perfect set is cleverly deconstructed during act one and subsequently reconstructed for act two. It’s a show full of entertaining visual sight-gags, too – we won’t spoil any of them, although the witch, played amusingly as a pantomime dame by Alasdair Elliott, is responsible for the lion’s share.

We really enjoyed this production of Hansel and Gretal. It may not be the most ambitious or original show we’ve seen, but it’s a well-performed opera featuring a talented cast and high production values. It is also an absolute rarity in that there is something here that will appeal to audiences of all ages. A lovely way to spend an evening in the park.