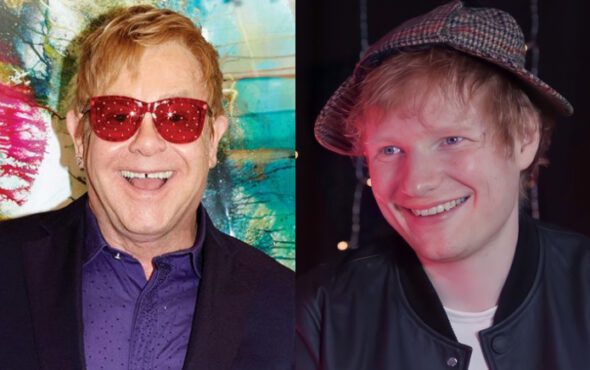 Pop icon Elton John has opened up about the “giant marble penis” he received from Ed Sheeran for his birthday.

During an appearance on The Carrie and Tommy Show, the Rocket Man singer discussed his 74th birthday and Sheeran’s unexpected gift.

“For my birthday this year, he gave me a giant marble penis. I don’t know if that’s because I’ve always been a p**** or not. It’s really big. It’s beautifully made but it’s solid marble,” he said.

“What do you buy the man who has everything? A huge marble penis.”

The music legend went on to say that the statue was placed in “a hidden in an area” of his house, away from his children Zachary and Elijah.

John also praised his close friendship with Sheeran and described the Shape of You singer as a “very generous, lovely man.”

Elsewhere in the interview, the Tiny Dancer artist revealed that he had a hand in changing up Sheeran’s personal and professional style.

“I said, ‘Ed, listen. You’ve worn the baggy shirts and the trousers and i’s got you so far but it’s now time to make a change,’” he said.

“About a year and a half ago, I hooked him up with Donatella Versace and got him some stuff. I said if you’re making the Bad Habits video, you’ve got to look great.

“I rang Donatella, she made him the clothes. He needs to come out with a new tour, I think he’s getting a band, and he’s changing his stuff. He loves it, it’s not as if he’s forcing him into anything he doesn’t want to do.”

John’s comments come a few weeks after Sheeran confirmed his involvement during his own appearance on the popular podcast series.

Aside from his iconic friendship with the Perfect singer, John is gearing up to appear on the upcoming third season of RuPaul’s Drag Race UK.

Earlier this month, the Daily Star revealed that he would be guest-starring on the mega-popular franchise.

“Elton is a massive fan of RuPaul and the show, so he was keen to be part of the new series,” an insider told the outlet.

“To say producers were thrilled to get him to sign up would be a massive understatement. They couldn’t believe their luck.

“Elton is by far the biggest star they’ve got taking part, but he won’t be the only A-List name. Drag Race UK has become a big hit for the BBC and execs think it can get even bigger.”

Listen to John’s full interview on The Carrie and Tommy show here.