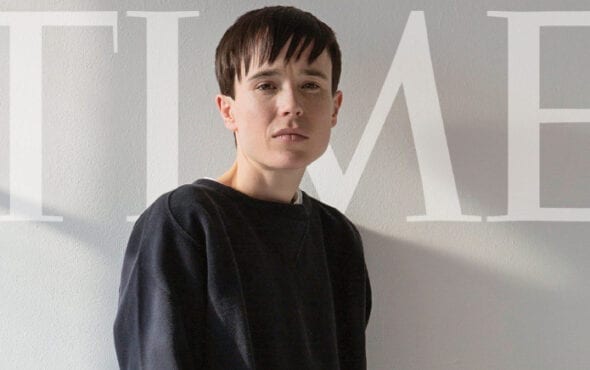 Elliot Page has made history as the first ever transgender male cover star of TIME.

The Umbrella Academy star disclosed his transgender and non-binary identity in a powerful statement on social media, in which he wrote: “My pronouns are he/they and my name is Elliot. I feel lucky to be writing this. To be here.

“To have arrived at this place in my life. I feel overwhelming gratitude for the incredible people who have supported me along this journey.

“I can’t begin to express how remarkable it feels to finally love who I am enough to pursue my authentic self.”

Speaking with reporter Katy Steinmetz, Page said he expected “a lot of support and love and a massive amount of hatred and transphobia” in response to his announcement, which is “essentially what happened”.

Page, who earned an Academy Award nomination in 2008 for his work as the title character in Juno, revealed that he’s “felt like a boy” since a very young age, and would often ask his mother if he could be a boy “someday”.

He also shared he was recovering from top surgery in Toronto, Canada, when he made the announcement about his gender identity.

While he emphasised in the interview that surgery isn’t necessary for all transgender people, Page said his life has been “completely transformed” because of it, as he can now recognise himself in the mirror.

Page also discussed the struggle for transgender equality, as well as the “crushing standards” and “pervasive stereotypes about masculinity and femininity” that are still prevalent in the entertainment industry.

“Extremely influential people are spreading these myths and damaging rhetoric — every day you’re seeing our existence debated,” he explained.

“Transgender people are so very real.”

You can read Page’s full interview with TIME here.

Page’s cover was shot by transgender photographer Wynne Neill, who described it as a “dream assignment” and what they have been “working towards” in their career.

“I’m so proud of Elliot and I am so grateful to the trans elders who risked everything to make this moment happen,” they wrote.

“I will probably have to add more to this caption later when I have the ability to form more words but for now I am just grateful, honoured and proud to be trans in this moment of time. Thank you Elliot.”

Elliot wrote in his caption: “With deep respect for those who came before me, gratitude for those who have supported me and great concern for the generation of trans youth we must all protect, please join me and decry anti-trans legislation, hate and discrimination in all its forms.”