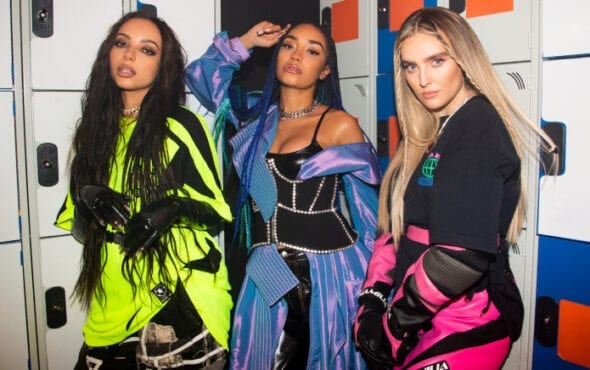 The sensational visual starts with shots of a dimly lit bar as patrons dance amongst one another. We are then treated to appearances from Drag Race UK stars A’Whora, Tayce and Bimini Bon Boulash.

As the video progresses, the three songstresses and their male alter-egos enter into the club for an all-out battle of the sexes.

The video also features an appearance from Saweetie, who effortlessly shines with her fiery verse and glamorous appearance.

Jam-packed with show-stopping choreography, breathtaking ensembles and hilarious interactions between Little Mix and their male counterparts, the video for Confetti is everything and more.

The new music video is the first release without former member Jesy Nelson, who left the band at the end of last year due to her declining mental health.

Since the release of their best-selling album Confetti, the group have been booked and busy. Earlier this year, the group earned their fifth number one on the UK Singles Chart with their smash hit single, Sweet Melody.

The vocal powerhouses have also been nominated for Best British Group at the upcoming BRIT Awards, which are set to take place later on this month.

Watch the full video for Confetti below and listen to the track here.