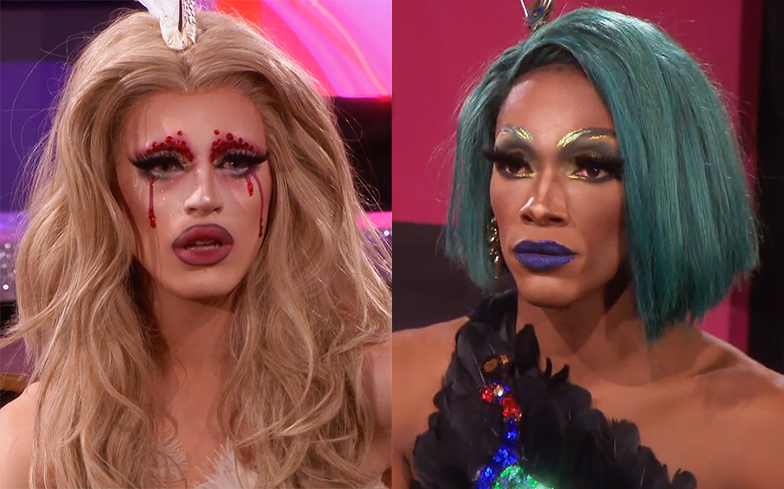 In the latest episode of Untucked, The Vixen discussed the way RuPaul’s Drag Race fans perceive black queens in comparison to white queens.

Over the course of thirteen seasons, black Drag Race contestants have faced more scrutiny than white contestants, and are often subjected to shocking, disgusting death threats from the fanbase, despite the show’s main message of promoting love and inclusivity.

Season 10 queen The Vixen highlighted this issue in Untucked during a heated conversation with Aquaria. The two young queens butted heads in the main episode after the latter questioned The Vixen’s challenge win a week prior, which resulted in Aquaria breaking down in tears.

“I was chilling,” said The Vixen. “You brought it over here, I brought it back, and all of a sudden, I’m a bitch.”

She continued: “You say something, I say something, you start crying. You have created the narrative that I am an angry black woman who has scared off the little white girl. So when you get super defensive and tell me that I’m being negative, when I’m just responding to what you brought to me, that will always read to these [pointing at the cameras] as a race issue.”

The queens agreed with The Vixen, which led to Aquaria realising the bigger picture. “I know this to be an issue,” she said.

The Vixen responded: “OK, now I know that you know. That’s cool. Act like it.”

Both queens addressed the topic on their social media. In a statement, Aquaria said: “The Vixen and I are both super strong and opinionated queens. We were definitely getting on each other’s nerves/pushing each other’s buttons because this competition brings out a lot of emotions in all of us.

“I reacted the way I did because it was so overwhelming in that moment and I’m not always best at communicating my feelings and thoughts in general. I also understood what The Vixen had to say and I agreed with her on that.

“I think she had a very valid point about optics and even though I was aware of this issue before, I still learned something from our discussion and I think many people watching can learn from this as well. As in any family, sisters argue but that doesn’t make us any less family.”

The Vixen then revealed, since the conversation, that she’s been subjected to death threats: “Yes I have received plenty death threats etc but they don’t compare to the amount of love coming in. #teamvixen I wish I could respond to everyone but know that I feel your support.”

One vile “fan” tweeted: “please die you fucking ugly bully playing mean doesn’t suit you… stupid ugly jealous whore, your looks are unpolished and your attitude is absolutely trash… no one likes you and you’ll never get booked stupid bottom of the barrel trash.”

Several of Drag Race’s alumni praised The Vixen for raising the issue, due to the fact that it hasn’t been addressed on the show.

Monét X Change said she’s happy “that we are having this conversation on TV”, while Aja said “racism in drag and on television is a conversation WAY OVER DUE.”

Take a look at all their reactions below:

Racism in drag and on television is a conversation WAY OVER DUE https://t.co/Fyq2RxGjex

I'm willing to hear all opinions. I will not be responding. . . unless you really come sideways. pic.twitter.com/eA6b1eZrDb

I’m happy that we are having this conversation on TV.

VALID POINT @TheVixensworld you hit that nail right on the head. Can we discuss lol.smh